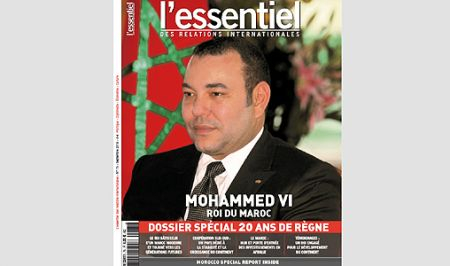 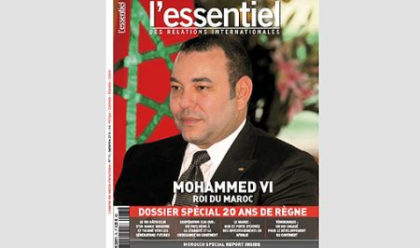 The French magazine “l’Essentiel has published a special issue on the 20-year reign of King Mohammed VI, focusing on his remarkable international stature and commendable far-sighted statesmanship recognized by the most influential world leaders.

The magazine cited in this regard statements made by the world’s superpowers leaders, African Heads of State, the UN chief and even the Pope Francis. They all praised the Sovereign’s leadership and the key role he plays on the regional and international scenes.

The French magazine quoted extracts from a message addressed to the Monarch by US President Donald Trump. “We will build on our FTA, our strong security partnership and our diverse cultural and educational ties to ensure a safer and more prosperous future for both our peoples”, said Mr. Trump.

President Vladimir Putin said he is upbeat over Moroccan-Russian future cooperation in all fields and joint contribution to the security and stability in the Mediterranean, the Middle East and Africa.

The Spanish Prime Minister Pedro Sanchez described Morocco as a friend and a strategic partner in trade, the fight against illegal migration and terrorism, welcoming the economic, social and cultural exchanges between the two countries.

UN Secretary-General Antonio Guterres praised the Sovereign’s valuable contributions to international peace and security, including UN peace operations, while Pope Francis commended Morocco’s religious freedom and the role played by Monarch, the Commander of the Faithful, for the promotion of moderate Islam, coexistence, inter-religious dialogue, world peace, unity and fraternity.