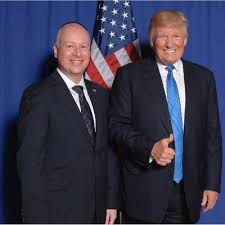 US President Donald Trump’s special envoy to the Middle East and key official in the US administration so called “deal of the century” purported to settle the Israel-Palestine conflict has announced his resignation few days before the White House unveils its roadmap.

President Trump himself on Twitter announced Jason Greenblatt’s resignation which will be effective probably after September 17, elections in Israel.

“After almost 3 years in my Administration, Jason Greenblatt will be leaving to pursue work in the private sector. Jason has been a loyal and great friend and fantastic lawyer….” he said.

Greenblatt and the White House were set to present the roadmap to settle the decades-long conflict between Israel and Palestine after the key elections in Israel.

The former Trump lawyer took the job in 2017 and has been a staunch ally of Israel and its illegal settlements in the West Bank.

Greenblatt will be replaced by Avi Berkowitz, a senior aide to Trump’s senior advisor and son-in-law, Jared Kuchner.