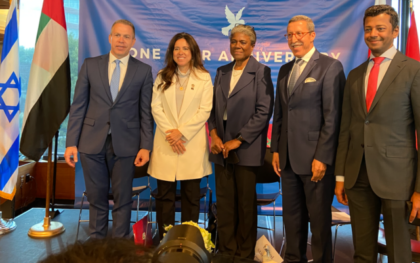 Morocco has pleaded for the establishment of a lasting peace in the Middle East, as a “strategic objective” to serve the present and future generations.

The plea was made by Permanent Representative of Morocco to the United Nations, Omar Hilale, who joined Monday the ambassadors of the United States, UAE, Bahrain, and Israel to celebrate the first anniversary of the Abraham Accords Anniversary at the Museum of Jewish Heritage in New York.

“Our region is tired of war. Our region has suffered from all kinds of extremism, terrorism and rejection of the other. Our region needs real and warm peace. We need peace in our hearts and minds. We need peace as a strategic goal and as a horizon for us and also for future generations,” Hilale said.

The UAE, Bahrain, the US, and Israel signed the Abraham Accords in September 2020. Later in the year, the agreement also included Morocco and Sudan.

The name of the agreements stemmed from the jointly shared Abrahamic beliefs of the signatory countries and was used as an attempt to build interfaith bridges between Israel and its Muslim neighbors or allies in the MENA region.

In his address, Hilale reaffirmed Morocco’s long-standing commitment and unwavering commitment to peace, security and prosperity in the Middle East.

“For the Kingdom of Morocco, this joyful celebration is a commitment to strengthen and expand the ties fostered by these historic Accords, and to accelerate the positive transformation of the region, to increase stability, security and prosperity for us and for future generations,” Hilale stressed.

The recent official visit to Morocco of the Israeli Foreign Minister, Yair Lapid, on August 12, marked by the signing of a series of cooperation agreements, reflects “the commitment of Morocco and Israel to strengthen their bilateral relations and give them a concrete impetus through the establishment of flexible and effective cooperation mechanisms,” said the Moroccan diplomat.

“Today, we are reaping the benefits of the positive momentum in our relations since the signing last December of the tripartite agreement between Morocco, the United States and Israel, which led to the establishment of five working groups covering promising sectors, such as research and innovation, tourism, aviation, agriculture, energy, environment, trade and investment,” noted Hilale.

The diplomat recalled that “above all, our relationship draws its strength from the long-standing attachment of the Jewish community of Moroccan origin to the Kingdom and the unbreakable ties between this community and King Mohammed VI, Commander of the Faithful, and protector of Moroccans of all confessions and beliefs”.

Morocco, where coexistence between religions and spiritual tolerance have been a reality for more than 12 centuries, will continue to provide a space for coexistence and human interaction to promote peace in the world, he insisted.

For his part, the Israeli ambassador to the UN, Gilad Erdan, said that the Abraham Accords are “the best illustration of the practice of tolerance and living together in peace with our neighbors”.

“After presenting a vision of coexistence, peace and prosperity, our nations quickly began to translate words into action,” Erdan said, noting that in addition to opening diplomatic representations, the Abraham Accords countries have signed dozens of memoranda of understanding in various areas of cooperation.

“These steps are crucial to laying the foundation for meaningful long-term relationships,” he said.

For her part, the US ambassador to the UN, Linda Thomas-Greenfield, noted that in the space of a year, concrete progress has been made through the Abraham Accords. The Biden administration “clearly wants to build on this model and replicate its success,” she said, adding that “the United States is committed to strengthening and expanding these Accords.”

According to US-based think tank the Wilson Center, the signings of the Abraham Accords “charted a new path in the history of Arab-Israeli relations by recognizing the State of Israel and normalizing diplomatic relations.”

The accords represented the first multinational “Arab normalization” agreement with Israel. In addition to political recognition of the Jewish state, the accords also opened the door for wider investment opportunities between the countries involved.

“This important diplomatic initiative is key to maintaining and strengthening peace and stability in the region while collaborating on areas of mutual interest,” said the Wilson Center.