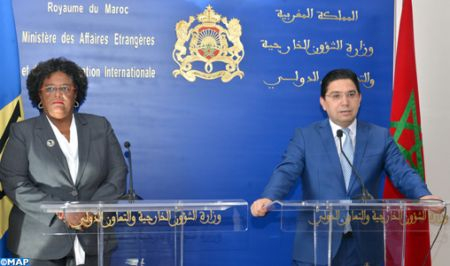 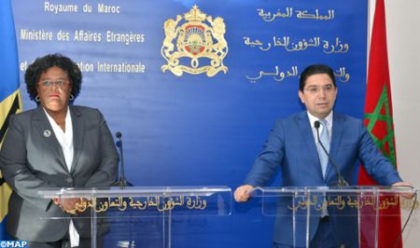 The decision was announced Friday in Rabat by Barbados’ Prime Minister Mia Mottley in a joint statement released following her visit to the North African Kingdom. The move comes few days after similar position adopted by Salvador.

The Barbados government calls on all parties to the Sahara conflict to continue, in good faith, the negotiations to maintain the momentum initiated by Morocco’s autonomy plan for the Sahara, a plan recognized worldwide as credible, serious and realistic.

The PM of Barbados also voiced full backing to a political solution based on realism and spirit of compromise, within the framework of Morocco’s territorial integrity and in accordance with the UN Security Council.

The Government of Barbados hailed Morocco’s commitment to the political process and its full cooperation with the UN Secretary General and his Personal Envoy to reach a final and mutually accepted political solution.

Foreign Minister Nasser Bourita applauded Barbados decision, describing it as a constructive position, which is in line with international legality and the general orientation of the international community.

He said the two countries share the same vision regarding relations between developing countries. He also expressed Rabat’s readiness to help Caribbean countries to open up to the Arab-African zone.

The Prime Minister of Barbados highlighted the role played by King Mohammed VI at the African level and also his efforts to lay bridges between continents through south-south cooperation.

Morocco and Barbados share the same viewpoints on several issues including the fight against organized crime and climate change, Bourita said, affirming that the two countries will coordinate their stands regarding issues of common interest in regional and international fora.

The visit highlighted by the signing of a bilateral cooperation roadmap for the period 2019-2021 destined to bolster their partnership in the sectors of tourism, development, investment, agriculture and renewable energy. The two sides also signed a memorandum of understanding for the establishment of a mechanism for political consultations.