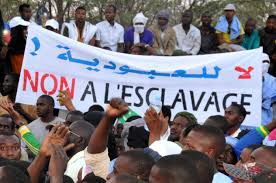 Amnesty International and 32 local human rights organizations have called on all candidates for this month’s presidential elections in Mauritania to sign a manifesto consisting of 12 commitments to promote and protect human rights in Mauritania.

Mauritania’s next president must urgently tackle the country’s poor human rights record by taking a tougher stance against slavery, human trafficking, and attacks on the rights to freedom of expression including intimidation and harassment of activists speaking out against discrimination, Amnesty International and 32 local human rights organizations said Monday in a statement.

The manifesto calls for a public commitment to end slavery, human trafficking and discriminatory practices through the implementation of new laws, policies and campaigns. It also calls for a new law to combat violence against women to be adopted within the first year the new president’s inauguration and assumption of office.

By signing the manifesto, candidates promise to ensure that if elected their government will make adequate resources available to the police and judiciary to enable them to identify and bring to justice suspected perpetrators in cases relating to exploitation. Candidates commit to ensuring the independence of the judiciary through a revision of the Constitution so that the president will no longer chair the High Council of the Judiciary.

The manifesto promises the repeal of laws criminalizing activities relating to the exercise of the right to freedom of expression, including provisions on criminal libel, apostasy and dissemination of false information.

“The human rights situation is poor in Mauritania. Anyone who dares to stand up against slavery, discrimination and other human rights violations and abuses is at risk of arbitrary arrest, unlawful detention and even torture. The next president cannot ignore these serious human rights challenges and will have to strive to ensure justice and effective remedies for Mauritanians whose rights have been trampled upon for so long,” said Kiné Fatim Diop, Amnesty International West Africa Campaigner.

“The future president must break with decades of gross human rights violations by carrying out reforms and changing practices to ensure human rights are fully respected.”

In 2015, Mauritania adopted a new law declaring slavery a “crime against humanity” punishable by up to 20 years in jail. It also set up three specialized anti-slavery tribunals but prosecutions have been rare.

There are still thousands of people living in slavery while Afro-Mauritanians and Haratines are discriminated against in many ways, including access to justice and enlistment.

Despite numerous complaints to the anti-slavery courts and the police, there is a deliberate tactic of keeping victims wait for long time and discouraging them.

“The next president has the opportunity to build a country where dignity and human rights are respected and promoted for all,” said Mamadou Sarr, President of the Forum des Organisations Nationales de Droits Humains (FONADH).

“All candidates must publicly commit to signing the manifesto putting human rights first.”

The Mauritanian Constitutional Court has cleared six aspirants for the country’s upcoming presidential polls set for June 22 to elect a successor to President Mohamed Ould Abdel Aziz, who is stepping down after his second and final term in office.

Campaigning in the West African nation is expected to kick off on 7 June. If there is no outright winner in the first round of elections, a runoff vote will be held on July 6, under a presidential decree.