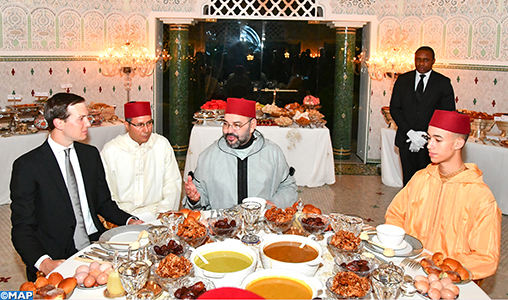 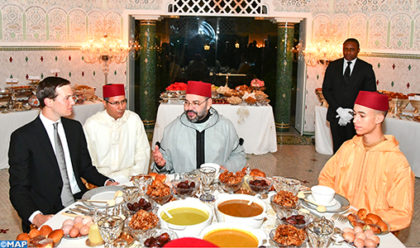 Earlier, the Sovereign held talks with Jared Kushner on strengthening the long-standing, strong and multidimensional strategic partnership between Morocco and the United States, as well as latest developments in the Middle East and North Africa region.

Kushner, who is tasked with the Israeli-Palestinian peace plan, described by President Trump as “the Deal of the Century”, arrived in Morocco earlier Tuesday.

Kushner’s visit to Rabat is part of a tour that will also take him to Jordan and Israel.

According to several US media, including CNN, the tour takes place in preparation for Washington’s upcoming economic conference scheduled for June 25-26 in

Bahrain and the Moroccan stop is pivotal given that King Mohammed VI leads the Al-Quds Committee, created by the Organization of Islamic Cooperation, that seeks to protect and promote Jerusalem as a religious, architectural and cultural hub.

The US media also recalled that earlier this year, Pope Francis and King Mohammed VI signed a joint declaration that declared Jerusalem to be a “symbol of peaceful coexistence” for Christians, Jews and Muslims.

The conference planned in Bahrain will focus on the economic portion of the peace plan, which seeks a multi-billion dollar investment in the region to spur the Palestinian and surrounding economies should a peace agreement be reached.

The Palestinian leaders have rejected the US-sponsored economic conference, announcing that they will not attend the event and emphasizing that the plan aims to force Palestinians to “sell” their country.