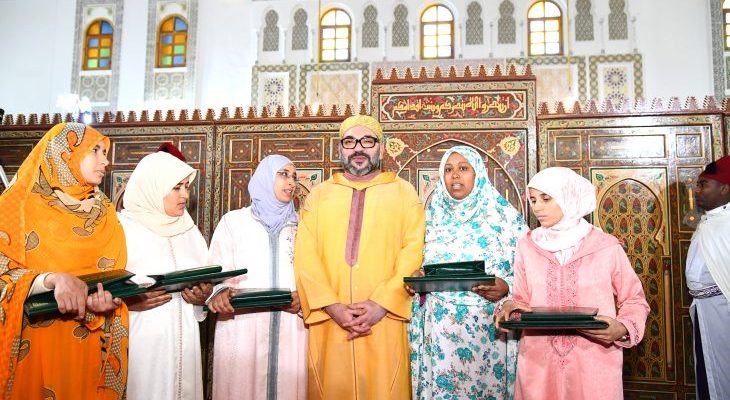 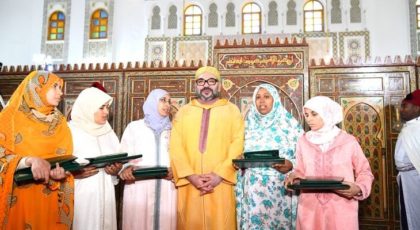 King Mohammed VI handed over to top women laureates of the 2017-2018 literacy program the Mohammed VI Prize at a ceremony in a Casablanca mosque following the Friday noon prayers.

In an address during the ceremony, Minister of Endowments and Islamic Affairs, Ahmed Toufiq, said that the Program to combat illiteracy in mosques has benefited more than 3 million people from 2000, the year it was launched, to 2018. The Program is also followed on the Mohammed VI channel of the Holy Quran, broadcast twice a day, and on the website of the ministry of Islamic Affairs, he said.

The plan for the period 2017-2021 aims to increase the number of beneficiaries of the national Program to combat illiteracy in mosques to 4.5 million people, or 1.5 million additional people, Toufiq added.

The ministry has mobilized 7,000 mosques for the implementation of this Program, moderated by 8,000 supervisors, 1,000 coordinators and pedagogical advisors and 400 pedagogical trainers.

Part of his department’s plans, the minister said a new experiment will be launched next year and implemented at some 1,000 locations in urban and rural areas.

The new experiment, which will target men and women under 50, will mobilize Ulema Councils, imams of mosques, preachers, morchidins and morchidates, in coordination with local authorities.

The national Program to combat illiteracy in mosques was launched in accordance with the High royal Instructions contained in the Sovereign’s speech on the occasion of the 47th anniversary of the Revolution of the King and the People (20 August 2000).

The national Program to combat illiteracy illustrates the special interest the Sovereign, Commander of the Faithful, continues to grant to the development of the human element.

The Program also enabled mosques to regain their leading position in terms of guidance, spiritual orientation and literacy, as well as their role in building a democratic, modern, open society based on the rejection of exclusion and marginalization, and the struggle against poverty and ignorance.