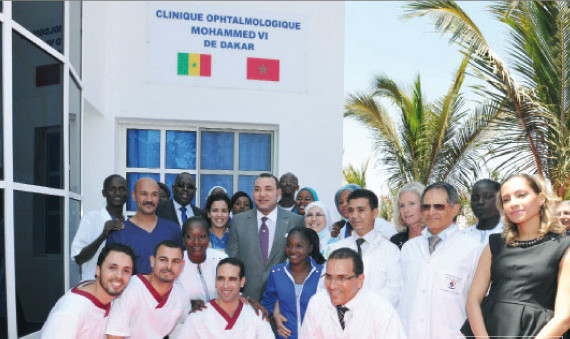 Morocco-Africa: the Human Face of a Cooperation 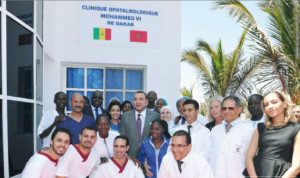 Cooperation between countries is most of the time benefit-earning oriented and before any project is launched, studies are conducted to assess its profitability.
This is generally the case, but not when these projects are part of Moroccan-African cooperation. All projects implemented by Morocco in the context of its cooperation with African countries are centered on the human element and are first and foremost meant to benefit the local populations.
Two such projects, an ophthalmology hospital and a drug production unit, were inaugurated on Monday in Senegal by visiting King Mohammed VI of Morocco and President of Senegal, Macky Sall.
Both projects, which illustrate perfectly the humane face of this cooperation, are meant to upgrade health services and ease the Senegalese people’s access to medicines and translate, if need be, Morocco’s strong commitment to South-South cooperation as well as its active solidarity with African people.
The projects also evidence Morocco’s determination to contribute to the progress and prosperity of the Senegalese people, to consolidate further the strategic partnership existing between the two countries and to help Senegal in its development efforts and in its fight against poverty and social marginalization.
The ophthalmology clinic, named after Mohammed VI, is located at Camberene in the suburbs of Dakar. It was constructed and equipped by the “Alaouite Foundation for Sustainable Human Development.”
The foundation was set up by Morocco in 2008 to carry out development projects in half a dozen countries in Central and West Africa. Its fields of intervention cover the areas of health, education, agriculture and social development at large.
The foundation is financed by King Mohammed VI, the royal holding ONA, the phosphates group OCP and the Moroccan private Holding Holmarcom operating in finance, distribution, logistics, air transport, real estate and insurance.
The ophthalmology facility, the first of its kind in this part of the continent, is furnished with state of the art equipment for cataract, glaucoma or retinal detachment surgeries. It can perform up to 50,000 consultation visits per year.
It has three consultation rooms, three surgery rooms, outpatient diagnosis and treatment departments, and inpatient care units.
The facility has also a training platform for practitioners from West Africa and can host postgraduate training days and seminars.
The drugs production unit, “West Afric Pharma”, a subsidiary of SOTHEMA MOROCCO laboratories, will supply high quality generic drugs not only to Senegal but also the other countries of the West African Economic and Monetary Union (UEMOA) and those the Economic Community of West African States (ECOWAS).
The unit which required an € 8 million investment will also contribute to the development of pharmaceutical industries in Senegal through the transfer of technology and know-how.
The Moroccan king’s visit to Senegal started last Friday was marked by the signing of two agreements. The first agreement deals with international road transport of passengers and goods while the second covers cooperation in the fields of mining, hydrocarbons, electricity and renewable energies.
The king of Morocco is expected this Tuesday in Abidjan, second leg of an African tour that will also take him to Gabon.
The visit to Cote d’Ivoire will highlight by the signing of investment, economic and social cooperation agreements.