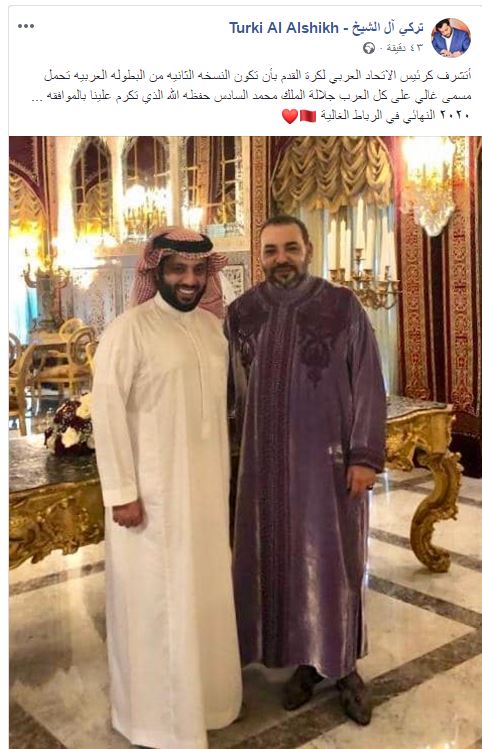 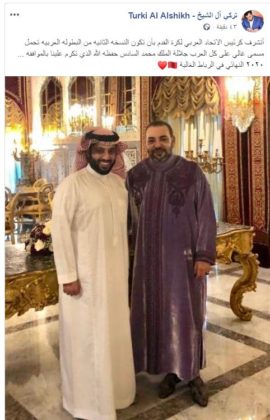 Turki Al-Sheikh, head of the Saudi Entertainment Authority and Chairman of the Arab Football Federation, announced that the 2020 Arab Club Champions Cup will be named the King Mohammed VI Champions Cup.

“I am honored as the President of the Arab Football Federation that the second edition of the Arab Champions Cup will bear a name dear to all the Arabs, His Majesty King Mohammed VI, may God protect him, who honored us with his approval,” said Turki Al-Sheikh in a posting published Tuesday on his official Facebook page.

He added that that the final of the 2020 tournament will be held in Rabat.

He did not reveal the stadium that will host the match, but it will most likely be the Moulay Abdellah stadium, the largest sporting facility in capital Rabat.

Turki Al Sheikh had tweeted on Monday that he was on his way to Rabat, an announcement that was very surprising to many because Al Sheikh, who was then head of the Saudi football federation, had not supported Morocco’s bid to host the 2026 world football cup. Instead, he had put his weight behind the north-American contenders, the USA, Canada and Mexico.

Shortly after arrival in Rabat, he was received by King Mohammed VI as shown in photos published by some local news outlets, including Barlamane.com.

The 2018-2019 edition of the Arab competition bears the name of Sheikh Zayed Al Nahyan, to mark the 100th birthday of the late President of the United Arab Emirates.