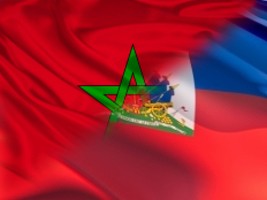 Haiti eager to learn from Morocco’s expertize in agriculture; fertilizers purchase agreement in the pipeline

Haiti is eager to benefit from Morocco’s agricultural expertize and is mulling plans to buy fertilizers from the North African country.

According to local media Haiti Libre, these cooperation prospects were reviewed at a recent meeting in Rome between Minister of Agriculture Jobert C. Angrand and Morocco’s ambassador to Italy Hassan Abouyoub, who is a former Agriculture Minister.

The meeting took place on the sidelines of the 161st meeting of the Council of the UN Food and Agriculture Organization (FAO) last week.

Haiti will shortly submit a fertilizers purchase deal to Morocco via its Embassy in Italy, the local media said, adding that Angrand deems Moroccan fertilizers as one of the best in the world.

The two countries initiated talks on cooperation in the field of agriculture during a Haitian recent mission in Morocco.

Part of this cooperation, 10 Haitian executives will shortly participate in a training program on agricultural credit, as Morocco has acquired expertize in the field through nation-wide strategies to meet the loan demands of farmers.