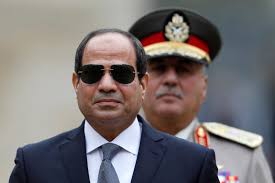 Recent constitution change maneuvers to expand President Fattah al-Sisi’s stay in power beyond 2022 and the unprecedented crackdown on criticism must wake up US policymakers, the Carnegie Endowment Center notes warning that the totalitarian regime in the most populated Arab country may not last long in front of growing discontent and anger.

In a paper titled “Worse than Mubarak” published on Foreign Policy, the center sounds the alarm over current tightening political situation in Egypt; one of the key US allies in the Arab world.

By removing the first freely elected President of the country Mohamed Morsi in July 2013, al-Sisi harbored the hope of millions of Egyptians, but the country’s strongman has so far walked away from the 2011 revolution that sought to establish a civilian regime in replacement of former autocratic leader Hosni Mubarak.

After embarking on his last four-year mandate won during last year March almost unchallenged elections, al-Sisi and his followers are one step away from modifying the 2014 constitution that will allow the General-turned President to remain in power until 2034, Hawthorne and Miller wrote.

Actually, Egypt’s parliament has overwhelmingly voted mid-February to approve draft constitutional changes that could extend President Abdul Fattah al-Sisi’s time in office by another 12 years.
Al-Sisi is due to stand down in 2022 when his second four-year term ends, but the amendments will lengthen presidential terms to six years and let al-Sisi serve another two.

The authors of the paper noted that the amendments will bolster al-Sisi’s hand over power in three main ways.

“This change would abrogate Sisi’s pledge to respect the sole remaining win from the 2011 uprising against Mubarak’s three-decade dictatorship: restricting presidents to two four-year terms,” they said.

“The constitutional changes would hand Sisi direct control over the judiciary’s top appointments and even its budget. That would destroy the last shreds of independence in a judicial system that, although much weakened in recent years, still contains a few brave judges willing to push for the rule of law.”

Thirdly, the authors of the articles believe, the Egyptian Armed forces will become much more emboldened in intervening in domestic politics, in its so-called role to maintain the constitution and democracy and safeguard the basic components of the state.

Many Egyptians, known critics of the regime, have gone missing or unaccounted for while hundreds of thousands languish in prison for mere comments judged hostile to the country’s strongman. Artists, journalist and celebrities have been reduced silence, the authors of the paper recalled.

The regime has enjoy the relative silence of Western powers, including the US and the EU who view al-Sisi as an important ally in the fight against terrorism in the region. US President Donald Trump has repeatedly backed the Egyptian President and continued providing the traditional US military aid.

“Washington has already been far too quiet in the face of Egypt’s rising authoritarianism. But the United States cannot afford to ignore Sisi’s pursuit of absolute power and the risks it poses to Egyptian and regional stability,” the article warned. It suggested that “the White House and Congress should make clear that they recognize Sisi’s brazen power play for what it is and will refuse to give him political cover or unconditional support if he proceeds.”

The authors fear that growing discontent materialized by repeated attacks in urban areas and continued fighting between the army and Islamists in the Sinai, coupled with economic hardship imposed by austerity measures could become downfalls of the regime in the manner it happened to Muammar Gaddafi in Libya and Saddam Hussein in Iraq.

“Yet this concentration of power, which is designed to shore up his regime, may make it more vulnerable over time. Political science scholarship—and real-life examples in Muammar al-Qaddafi’s Libya and Saddam Hussein’s Iraq—has shown that personalist regimes are substantially more likely to end in violence than other forms of authoritarian governance,” the authors said.