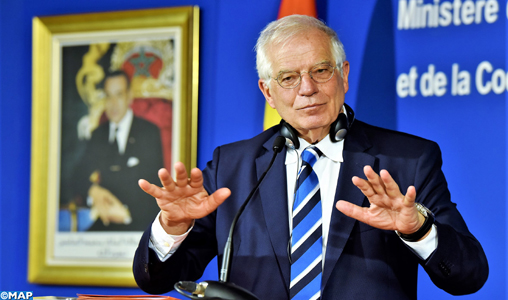 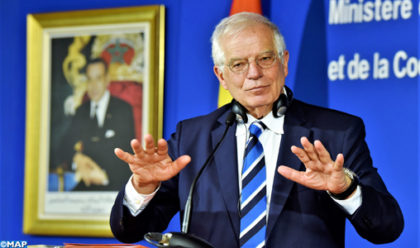 Spain has renewed its support for the political process led exclusively by the United Nations to reach a settlement of the Sahara issue, in the framework of Security Council resolutions.

This position has been reiterated by Spanish Foreign Minister, Josep Borrell, Thursday in Rabat, at a joint press conference with his Moroccan peer Nasser Bourita.

“Spain defends the centrality of the United Nations and supports the efforts of the UN Secretary-General and his Personal Envoy to achieve a political solution in the context of the relevant UN Security Council resolutions”, said the Foreign Minister who was part of the delegation that accompanied King Felipe VI during his official visit to Morocco Feb.13 – 14.

Spain’s “position on the Sahara issue is accurate and unwavering,” Josep Borrell insisted, adding that it is a “state position that has not changed”.

The clarification made by Josep Borrel comes in the wake of the false statements attributed to the Spanish ambassador in Algiers, Fernando Moran Calvo-Sotelo, by the Algerian media.

These media claimed that the Spanish diplomat told Algerian National Assembly President Mouad Bouchareb that there was a “convergence of views” between Algeria and Spain on the Sahara issue.

The maneuver orchestrated by Algeria, the mentor of the Polisario separatist movement, was all the more insidious that it intervened on the eve of the Spanish King’s visit to Morocco.

He added that the rich, in-depth and fruitful talks King Mohammed VI held with his Spanish guest shall give a new qualitative impetus to bilateral relations. These talks touched on the multidimensional relations existing between the two countries, whether in the political, economic, security or cultural realms, as well as on topical regional and international issues, Bourita said.

He noted that the global strategic partnership signed, Wednesday in Rabat, during a ceremony co-chaired by the two Sovereigns, completes the Treaty of friendship, neighborliness and cooperation signed by the two countries in 1991, and translates the shared will to upgrade bilateral ties to a much higher, more ambitious level. Moroccan-Spanish partnership, he added, is based on trust, mutual respect and serenity in dealing with all matters as part of a win-win cooperation.

At the opening of the weekly cabinet meeting held Thursday, Head of the Moroccan government, Saad Eddine El Othmani, described King Felipe’s visit to Morocco as “a historical event” that crowns the remarkable evolution of relations between the two kingdoms.