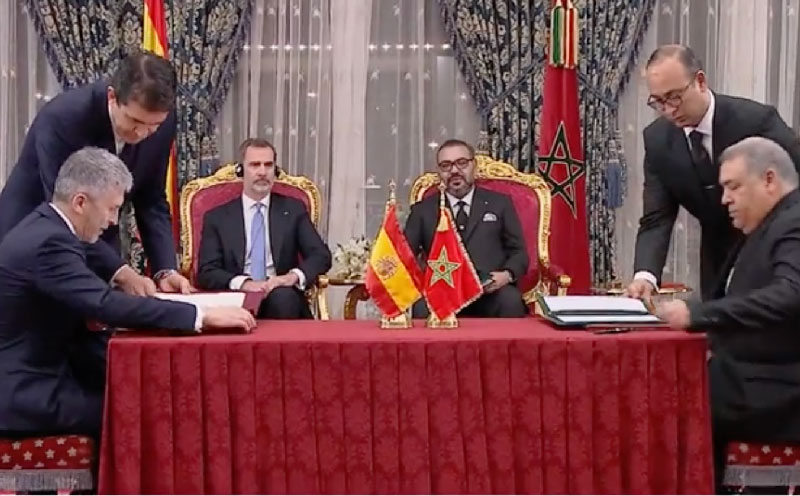 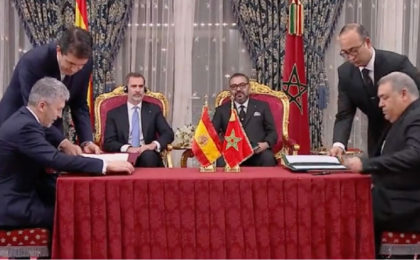 Morocco and Spain are on way to further diversify their bilateral partnership with the signing of eleven cooperation agreements in different fields.

The agreements were signed at a ceremony in Rabat chaired by King Mohammed VI, his Son Crown Prince Moulay Hassan and King Felipe VI of Spain, who arrived earlier in the afternoon on a two-day state visit to Morocco.

In this respect, a Memorandum of Understanding on the multidimensional strategic partnership was signed between the Spanish and Moroccan foreign ministries.

In the field of culture, an agreement was signed to hand the Cervantes theatre in Tangier to Morocco. The 106 year old edifice has been closed for some three decades.

A Memorandum of Understanding was signed during the same ceremony between the National Foundation of Morocco’s Museums and the Spanish Ministry of Culture and Sports for cooperation in museums, followed by another MoU between Morocco’s Royal Archives and the National Heritage of the Kingdom of Spain.

In the realm of security, the interior ministries of the two countries signed an agreement in the fight against criminality.

Spain and Morocco’s ministries of energy also signed a strategic partnership on energy including a MoU to establish a third electricity interconnectivity.

The two countries have also agreed to facilitate trade and passenger flows at the Strait of Gibraltar as well as to promote cooperation between Morocco’s flag carrier Royal Air Maroc (RAM) and IBERIA Airlines.