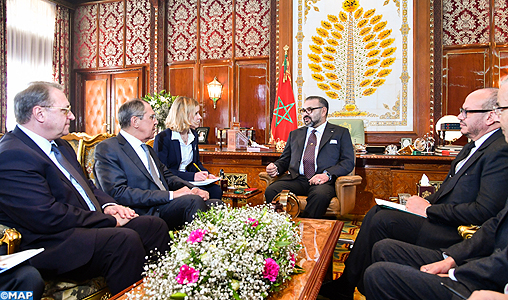 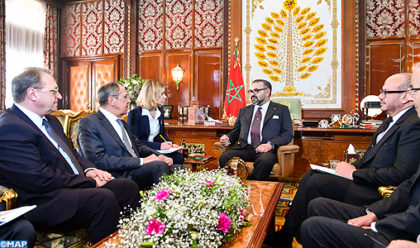 King Mohammed VI received on Friday in Rabat visiting Russian foreign minister Sergei Lavrov who hailed on this occasion the regional and international leadership of the Moroccan sovereign.

Talks between the two sides covered several regional and international issues of common interest, particularly in the Middle East and Africa, said a statement issued by the Royal Office.

The King reiterated, on this occasion, the invitation extended to President Vladimir Putin, to pay an official visit to Morocco, while the Russian top diplomat conveyed to the Monarch the friendship and greetings of Mr. Putin, added the statement.

The Russian foreign minister is paying an official visit to the North African Kingdom within the frame of the strengthening relations between Rabat and Moscow.

His meeting with the Moroccan King confirms the deep strategic partnership sealed during the historic royal visit paid to Moscow in March 2016.

“This exceptional partnership has led to a deep and multidimensional development of relations between the two countries and has opened ambitious prospects for enhancing political dialogue and strengthening economic and sectoral cooperation”, stressed the Royal Office statement.

The audience granted by King Mohammed VI to Lavrov was also an opportunity to voice satisfaction over the implementation of major joint projects and actions in priority sectors such as agriculture, fisheries, energy, industry and tourism.