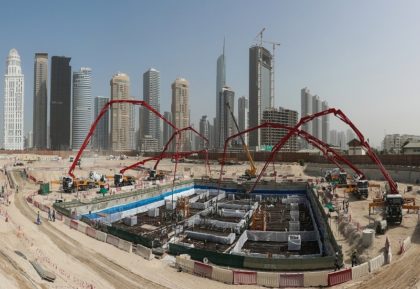 Dubai free zone operator DMCC announced Sunday it awarded the contract for the construction of 78-storey ‘Uptown Tower’ in uptown Dubai district to Belhasa Six Construct, an entity of BESIX, reports say.
“Awarding Six Construct the contract to construct Uptown Tower is an important step in bringing the much-anticipated Uptown Dubai district to life. The quality on show from the bids received was incredibly high,” said Ahmed Bin Sulayem, executive chairman, DMCC.
DMCC did not disclose the size of the deal but said the contact was awarded after an “extensive and competitive international tender process”,
Uptown Tower will comprise high-end restaurants, conference facilities, grade A offices, 237 branded residences and a health spa.
The skyscraper will also feature luxury hotel rooms and suites in partnership with Accor Hotels’ luxury lifestyle hotel brand, SO/ which is marking its debut in the Middle East.
The structure is designed by Adrian Smith + Gordon Gill Architecture while the interior design will be executed by Rockwell Group, a New York based firm.
In August, DMCC confirmed that foundation works for the tower had been completed, Gulf Business reports.