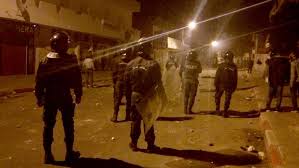 Tunisia is rocked by popular protests over the deteriorating social and economic situation, lack of employment, growing poverty and failure to fulfil the goals of the Jasmine revolution, which toppled the authoritarian regime of President Zine el Abidine Ben Ali in 2011.

Clashes between police and Tunisian authorities took place in several regions over the past two days after journalist Abderrazak Zorgui posted a video online before his self-immolation in Kasserine, in protest against the hardship endured in the North African country.

According to Tunisian Interior ministry, 18 people have been arrested, including 13 captured in the provincial city of Kasserine and five others in Tebourba, near Tunis.

The self-immolation of a street vendor in Tunisia, late 2010, in protest at police harassment sparked Tunisia’s revolution and the Arab Spring uprisings across the rest of the region. Kasserine was one of the first cities to rise up after the death of the vendor Mohammed Bouazizi. The popular uprising ended the 23-year rule of Ben Ali.

Despite the country’s democratic transition since then, authorities are still struggling to improve poor living conditions in the face of rampant inflation and persistent unemployment.