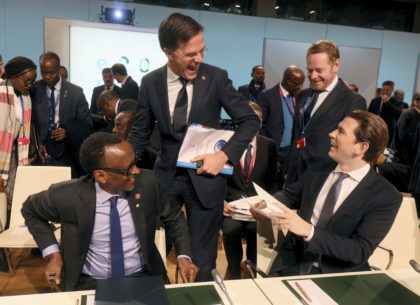 Only three months after the launch of the Africa–Europe Alliance, the European Commission presented the first progress made in boosting investment and creating jobs in Africa at the High-Level Forum Africa-Europe held in Vienna, Tuesday.

The Forum was hosted jointly by Austrian Chancellor Sebastian Kurz, as EU President, and Paul Kagame, President of Rwanda and Chairman of the African Union for 2018.

President of the Commission Jean-Claude Juncker reiterated Europe’s ambition for a true and fair partnership among equals between Africa and Europe, when presenting the first results of the Africa–Europe Alliance for Sustainable Investment and Jobs, launched three months ago in a bid to deepen economic and trade relations between the two continents.

According to a press release by the European Commission, the EU External Investment Plan aims to raise significant sustainable investments in Africa and European neighborhood countries by 2020. From the €44 billion announced, programs already in the pipeline will mobilize €37.1 billion of investments.

The new projects announced at the Forum Tuesday include an EU guarantee (NASIRA Risk-Sharing Facility), the first of its kind under the EU External Investment Plan. It will use EU funds worth €75 million to leverage up to €750 million of investments for entrepreneurs in Sub-Saharan Africa and the EU’s southern neighborhood.

Alone this is expected to create 800,000 jobs and benefit those who usually struggle to access affordable loans, such as small and medium sized enterprises, internally displaced people, refugees, returnees, women and young people.

A new Agri-Business Capital fund worth €45 million will support smallholder farmers by increasing their access to finance. The plan is expected to attract more than €200 million in investments and benefit as many as 700,000 households in rural areas.

Another program worth €61.1 million will support solar power plants in Morocco and €46.8 million will be invested in depolluting the Kitchener Drain in the Nile Delta region in Egypt.

The EU, which is also committed to support business and investment climate reforms in Africa, has pledged over €540 million for that purpose in 2018 alone, exceeding the Africa-Europe Alliance’s commitment to increase EU support to €300-350 million per year for 2018-2020, the Commission explained in its press release.

Besides, it added, Public-private dialogues to promote Sustainable Business for Africa (SB4A) have been established in Côte d’Ivoire, Ethiopia, Morocco, Nigeria, South Africa, Tanzania, Tunisia and Uganda. Similar dialogues in 25 additional African countries are currently being prepared. This will help to boost decent job creation, in particular for young people and women. The dialogues were launched in Abidjan during the EU-Africa business forum in November 2017.