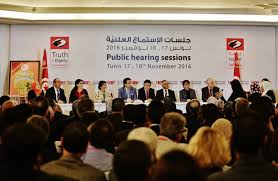 Tunisia’s Truth and Dignity Commission that was set up in 2014 to investigate and serve justice to victims of half a century of dictatorship is poised to submit its recommendations.

The first version of the recommendations is to be delivered at a public event on Friday and Saturday, before the full report is submitted by Dec. 31.

The government, with the assistance of a parliamentary follow-up committee, will have one year to draw up an action plan based on the recommendations.

Over the past four years, the panel has heard harrowing testimony from almost 50,000 witnesses, including victims of torture in jail. Some testimonies were aired on TV stations.

Victims of gross violations await justice in the prosecution of perpetrators and the government’s commitment to deter future abuses.

In this connection, thirteen specialized courts have been set up and started work at the end of May on dozens of cases submitted by the commission.

Twenty trials are underway, mostly of victims of the 2011 revolution and of radical and leftist opposition figures tortured under the rule of Ben Ali and Habib Bourguiba.

At the end of November, the commission drew up criteria for compensation that exclude those with post-2011 government or parliamentary posts.

Around 25,000 people are eligible to compensation from the Al-Karama (Dignity) Fund established in 2014.

However, a contested amnesty law passed in 2017 cleared some officials suspected of administrative corruption.

The commission also faced political resistance with the return of former regime leaders to power, internal disputes as well as the lack of cooperation by state institutions.

The state, faced with accusations of torture and sexual violence, has rejected 1,000 demands for “reconciliation” with the victims.

A row has also broken out over compensation cases, with members of parliament claiming the costs would bankrupt the state and that many claims were designed to benefit supporters of Islamist movement Ennahdha.