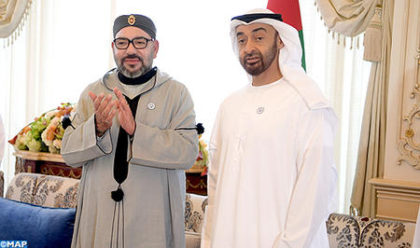 King Mohammed VI of Morocco is on a visit to the UAE where he met Crown Prince of Abu Dhabi Sheikh Mohamed bin Zayed Al-Nahyan.

The visit by King Mohammed VI coincides with the commemoration of the centenary of the birth of late Sheikh Zayed bin Sultan Al-Nahyan, said a statement by the Royal Office relayed by Morocco’s news agency.

After attending the council of the Crown Prince of Abu Dhabi, Morocco’s King and his host held a tête-à-tête meeting for about an hour discussing the means to promote joint action, with a view to enhancing the excellent relations between the two countries to be a model for bilateral, concrete and efficient cooperation.

The two leaders also discussed various topical regional and international issues, with particular emphasis on modalities for cooperation to consolidate security and stability. In the same context, consultations were held on the situation in brotherly Libya, the statement said.

The meeting is a continuation of regular consultations and close coordination between the leaders of the two countries, as a concrete expression of their firm willingness to consolidate these privileged relations in all areas of cooperation to serve the interests of the two countries and the two brotherly peoples.