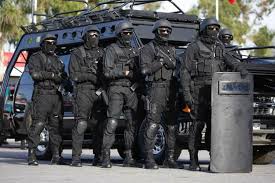 The Central Bureau of Judicial Investigations (BCIJ) dismantled, this Tuesday, a five-member terrorist cell in the Moroccan northern city of Tetouan.

The five individuals, aged between 23 and 33, have alleged links with the ISIS terror group.

The search operations enabled the seizure of electronic devices, knives and a military uniform, said the BCIJ in a statement.

Preliminary investigations show that the suspects pledged allegiance to the self-styled “emir” of ISIS, Abu Bakr al-Baghdadi and have adhered to the propaganda of this terrorist group and its extremist rhetoric.

The cell members are suspected of having links with terrorists in conflict zones, such as Syria and Iraq, the statement said, adding that they were plotting terror attacks and criminal actions across the country.

The five cell members will be brought to justice immediately after investigation, the BCIJ statement said.

Tuesday’s operation is part of Morocco’s national and international counterterrorism initiatives. These initiatives have earned the Kingdom praise from its international allies who appreciate it as a highly capable partner in the Global Coalition to Defeat ISIS.