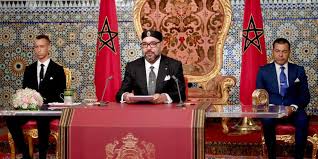 Morocco has renewed its commitment to the dynamics launched by the UN Secretary-General Antonio Guterres, in cooperation with his personal envoy for the Sahara, making it clear that this commitment is based on the same frame of reference set out earlier.

“Morocco has been confidently and responsibly engaged in the dynamic action launched by the Secretary-General of the United Nations, in cooperation with his Personal Envoy,” said King Mohammed VI in a speech he addressed to the Nation Monday evening on the 65th anniversary of the Revolution of the King and the People.

“Our commitment in this connection is based on the same frame of reference I set out last year in my address on the occasion of the anniversary of the Green March,” he said, expressing satisfaction that “there is increasing compatibility between these principles and the stances adopted by the international community”.

Indeed, the Monarch noted, the recent resolutions of the UN Security Council and the African Union Summit confirm, without any doubt, that the UN has exclusive authority to manage the political process relating to the Sahara issue.

I should like to take this opportunity to express my thanks and appreciation to the leaders of African sister nations who have reacted positively to Morocco’s principled stances and responded to the call of the Security Council, which invited the members of the international community to support its efforts.

The epic of the Revolution of the King and People illustrates the heroic struggle jointly waged by the Moroccan Monarch and people against the French colonial authorities, which exiled on August 20, 1953, the Late King Mohammed V and the Royal Family.
The exile ignited a fierce resistance that ended only in 1955 after Morocco recovered its independence and the Royal family returned home.

In his speech on this anniversary, the Monarch underlined that the spirit and values of the Revolution of the King and the People, and the unanimity, cohesion and sacrifices underpinning it, are the same as those that galvanize Moroccans whenever it comes to the question of the country’s territorial integrity.

“Although it took place in difficult circumstances, it was an enlightening revolution. It taught Moroccans the true meaning of patriotism and helped us move forward,” the King said.

“Today, we are witnessing the dawn of a new revolution – one in which we seek to rise to the challenge of completing the construction of modern Morocco; a revolution through which we aim to give Moroccans the place they deserve in life, especially our young people, whom I have always regarded as the country’s true wealth,” the King stated further.