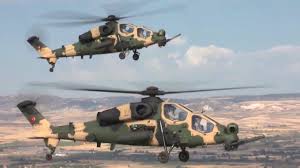 A delegation of the Royal Armed Forces recently visited the Ankara-based Turkish Aerospace Industries headquarters to negotiate the purchase of T-129 attack helicopters, the much coveted aircraft by international air forces.

According to FAR-Maroc, a website specializing in defense issues, senior officers of the Royal Armed Forces have just made a trip to Turkey to negotiate the acquisition of these combat helicopters, that were recently used by Turkey in the battle of Afrine in Syria, under the codename “olive branch”.

The acquisition of these helicopters will strengthen the FAR’s deterrent capacity and enrich their fleet consisting mainly of reconnaissance and combat helicopters “Gazelle”, “Bell 205” and “Belle 206”, “Chinooks” and “Predator” drones (USA) and “Eads Harfang” (EU), FAR-Maroc stated.

According to the website, several international armies showed interest in purchasing the Turkish aircraft, including the Pakistani air force, which placed in 2018 an order for 30 T-129 attack helicopters.

The aircraft is designed for advanced attack and reconnaissance in hot and high environments and rough geography in both day and night conditions.

North Africa Post's news desk is composed of journalists and editors, who are constantly working to provide new and accurate stories to NAP readers.
NEWER POSTUndeserved Elimination of Morocco at Russia 2018
OLDER POSTSahara: MEPs Urge EU to Intervene to End Sufferings of Women Sequestered by Polisario