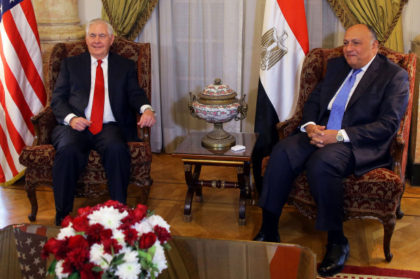 US Secretary of State Rex Tillerson on Monday called on Egypt to hold free and transparent presidential elections next month in a vote that is smeared by crackdown on President Sisi’s rivals and marked by wave of oppression.

Tillerson, who began a five-nation visit to the Middle East with a stop in Egypt Monday, touched in talks with Egyptian counterpart Sameh Shoukri on a set of topics, including economic and military cooperation, and the fight against terrorism.

At a joint news conference, the two officials stressed that they had agreed “not to interfere in each other’s internal issues.”

Tillerson also noted that discussions included “the promotion and protection of human rights and the vital role of civil society in Egypt” and the upcoming Egyptian presidential election in March, in which incumbent President Abdel Fattah Sisi is running largely unopposed.

Over a dozen international and regional rights groups, including Human Rights Watch and the International Commission of Jurists, said that next month’s presidential election in Egypt does not meet the “minimum requirements” for a fair and free vote and called on Cairo’s Western allies to denounce the “farcical” election.

The incumbent, general-turned-president Abdel-Fattah Sisi, is virtually certain to win the March vote, his only challenger being an obscure politician and one of his most ardent supporters.

Moussa Mustafa Moussa entered the race in the eleventh hour, sparing Sisi and his government the deeper embarrassment of a one-candidate election.

Meanwhile, leaders of opposition parties who called for a boycott of the vote are being investigated on allegations they are seeking to destabilize the country.

On the fight against terrorism, Tillerson stressed that both the US and Egypt are determined to jointly pursue counterterrorism efforts. He noted that Egypt is a key member of the US-led coalition against the so-called Islamic State group.

Tillerson also held private talks with President Sisi at the presidential palace. A State Department spokeswoman said they focused on their shared fight against terrorism and enhancing economic and commercial ties between the United States and Egypt.