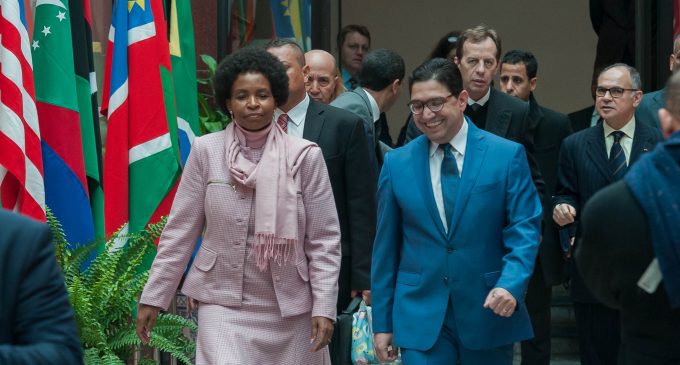 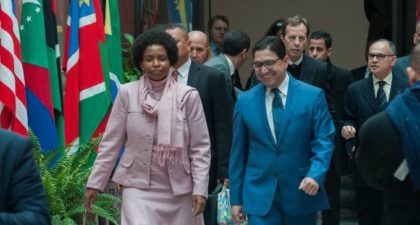 South Africa’s Foreign Minister Nkoana-Mashabane told the press, on the sidelines of her participation at the Ministerial Conference for an African Agenda on Migration held in Rabat on January 10, that her country and Morocco share the same vision regarding the need for African countries to take the lead in addressing migration challenges.

The South African Minister was seen walking side by side with her Moroccan counterpart Nasser Bourita towards the meeting hall. Following a meeting with Bourita, Nkoana-Mashabane said she is honored to convey a message of friendship to King Mohammed VI from South African President Jacob Zuma on the occasion of Morocco’s holding of the Ministerial Conference for an African Agenda on Migration.

Morocco and South Africa have for more than a decade given each other the cold shoulder on the backdrop of Pretoria’s support for separatists in the Sahara. However, an ice breaking meeting between King Mohammed VI and President Jacob Zuma showed that a promising future awaits relations between the two countries. Following this meeting, held in Abidjan on the sidelines of EU-AU summit last November, the two leaders decided to upgrade their bilateral relations to an ambassadorial level.

For his part, Bourita said that his meeting with his South African peer is an opportunity to coordinate stands on a set of priority issues for the African continent, on top of which migration, security and development.

The goal of the meeting on migration is precisely to move forward in this direction, Bourita said, stressing that the talks he had with the south African minister were an opportunity to coordinate action by the two countries on migration in particular.

He said that cooperation between Morocco and South Africa would have a beneficial impact on spurring collective efforts in Africa as a whole.

King Mohammed VI, as the leader who, at the 28th AU Summit, was put in charge of the question of migration, has submitted a paper to the AU’s presidency, laying out a common African Vision on migration and the related stakes and challenges.

The document, entitled “Vision for an African Agenda for Migration”, was presented to Guinean President, Alpha Conde, Chairman of the African Union, on July 3 by the King’s brother Prince Moulay Rachid who led the Moroccan delegation to the 29th African Union Summit, held in Addis Ababa under the theme “Harnessing the Demographic Dividend through investments in Youth.”

The preliminary paper will serve as a basis of a proposal that will be submitted by the King to the African heads of state at the next AU summit in order to chart a real African Agenda on migration.

North Africa Post's news desk is composed of journalists and editors, who are constantly working to provide new and accurate stories to NAP readers.
NEWER POSTEU Seeks Renewal of Fisheries Agreement with Morocco
OLDER POSTMigration: Morocco Sets Example for the Rest of Africa