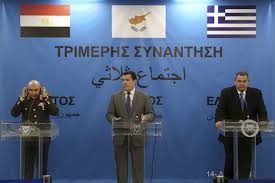 The defense ministers of Egypt, Cyprus and Greece vowed to step up cooperation in combating drug, weapons and human trafficking in the East Mediterranean and to share information on countering the threat of terrorism.

The Ministers also announced the setting up of a coordinating body to oversee joint special forces drills geared toward protecting vital sea lanes in the eastern Mediterranean.

Cyprus’ Defense Minister, Christophoros Fokaides, for his part, said that such a tripartite cooperation is an extremely important regional initiative that has already yielded results in a number of areas, ranging from economy, energy and tourism to health and agriculture.

The Egyptian minister Sedki Sobhy said that the meeting had confirmed the ‘deep and common military relations of the three countries that have been established for several decades as a result of the continuous efforts of the leaders of Cyprus, Greece and Egypt’.

Cooperation between Egypt, Cyprus and Greece on illegal immigration, smuggling and obstruction of terrorist movement is imperative, he said, as well as safeguarding energy investments in the Eastern Mediterranean and the maritime shipping routes.

The Egyptian official said intelligence-sharing between the three countries is also a key element of cooperation aimed at heading off potential threats to security.

North Africa Post's news desk is composed of journalists and editors, who are constantly working to provide new and accurate stories to NAP readers.
NEWER POSTThe US seeks to Supply Morocco with Natural Gas
OLDER POSTOIC Calls for Recognizing East-Jerusalem as Occupied Capital of Palestine