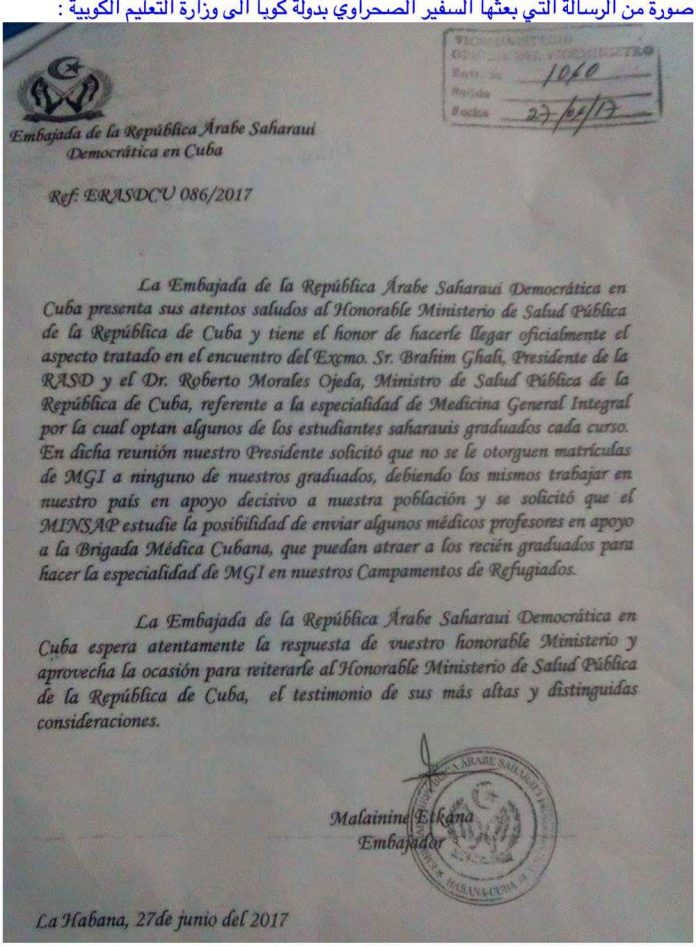 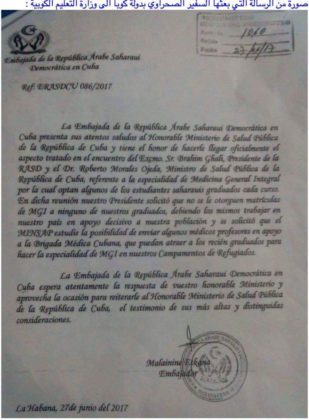 A leaked letter sent by the so-called ambassador of the self-proclaimed Sahrawi Republic in Cuba reflects the increasing number of young graduates who decided never to return to the Tindouf inferno.

In the letter, the Polisario was requesting Cuban authorities not to deliver degrees to graduating Sahraouis until they have returned to Tindouf camps, in a move to keep them held under a military siege.

Any attempt to flee the harsh living conditions prevailing in the Tindouf camps may lead to death. Last March, the Algerian army has shot dead a Sahraoui as he attempted to leave the Polisario-administered Tindouf camps on board a car.

In January 2014, two Sahraouis, Mohamed Alyine Bih and Khadri Hamadha Khandoud, were shot dead by the Algerian army near the borders with Mauritania.

Any protest by the population held in abject conditions in Tindouf camps against the military siege imposed by the Polisario leadership and its mentor Algeria has been met by deadly use of force.

International rights watchdogs, including Human Rights Watch and Amnesty International, have on multiple reports drew attention to the plight of the population held against their will in Tindouf where the Algerian state has relegated the destiny of thousands of Sahraouis to the mercy of a separatist militia that trades in their suffering.

UN Security Council resolution 2351 has once more reiterated the call on Algeria to uphold its responsibility to allow a census of the population held in the camps.

Algeria’s obstinacy to allow a head-count of the population of the Polisario-run camps prompted the EU to reduce aid sent to these camps in a bid to curb humanitarian aid diversion.

The decision was taken following a report by the EU anti-fraud office (OLAF) denouncing the embezzlement of humanitarian aid by the Polisario leadership and Algerian officials.

Therefore, the European Commission decided to cut aid commensurately with the estimated number of 90,000 people instead of the inflated 165,000 people put forward by the Polisario and Algeria in an attempt to sell the idea of the existence of a “Sahraoui People” with a “republic” in exile.

Carrying out a head-count of the population held in Tindouf will enable international aid agencies to assess the needs of the population and will also pave the way for the camps dwellers to obtain the refugee status. This will grant them the right to return to their homeland Morocco or at least the right to choose freely their country of asylum. Such options that Algeria and the Polisario dread the most as they continue to trade in the suffering of Sahraouis living in abject conditions.