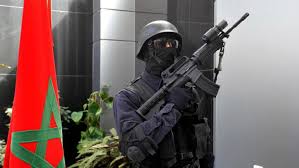 Director of the Central Bureau for Judicial Investigation (BCIJ) Abdelhak Khiame said that this security apparatus continues to show effectiveness at the national and international level as it has managed to dismantle 45 terrorist cells and arrested 548 terrorists since its creation in 2015.

In 2015, the BCIJ neutralized 21 terrorist cells and 19 other cells in 2016, four of which are affiliated to the notorious Al Faye Wa Al Istihlal terrorist group, said Khiame in an interview with Morocco’s news agency MAP.

The director of the BCIJ, also known as Morocco’s FBI, said that 36 of the busted cells were loyal to the self-proclaimed Islamic state, adding that 548 suspects were brought before justice (275 in 2015 and 273 in 2016).

As for Moroccan fighters within the ranks of the Islamic state, Khiame said that 71 have so far returned to the Kingdom. 47 were arrested in 2016, 39 of whom returned from the front in Iraq and Syria and 8 others from Libya.

At the national level, 167 terrorist cells have been dismantled since 2002, he said adding that 341 terrorist attacks were foiled by Moroccan security services, while 2,963 suspects were arrested and brought before justice.

Khiame also voiced satisfaction with the performance of the Moroccan security services and the Kingdom’s comprehensive approach to tackle the root causes of terrorism. In this respect, he said that Morocco, under the leadership of King Mohammed VI, adopted a multidimensional approach that integrates security, social and educational dimensions in the fight against terrorism. He drew special attention to the reform of the religious sphere and the promotion of universal values in the educational system along with the launch of substantive social development projects under the National Initiative for Human Development (INDH).

Morocco stands as an instrumental partner in the global fight against terrorism, he said, noting that the Kingdom cooperates closely with France, Italy, Netherlands, Denmark, Spain, Belgium, the US as well as several Arab and African countries.

Yet, the head of the BCIJ deplores the low level of cooperation in the Maghreb region which is facing serious security threats.

“Algeria refuses to cooperate with us, despite the trans-border threats that the region is facing. It is crucial to cooperate. In my opinion, much remains to be done at the inter-Arab level and not only in the Maghreb,” he underscored.

In this respect, Khiame warned that southern Algeria has become a sanctuary for Al Qaida, adding that the situation created by Algeria in Tindouf where thousands of sequestrated people have been abandoned to poverty and abject living conditions are falling as an easy prey to several terrorist groups in the region.