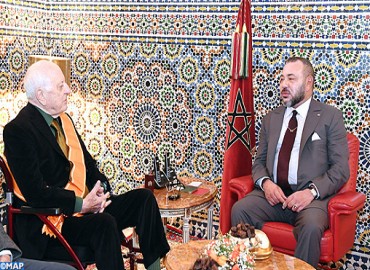 King Mohammed VI received on Thursday in Marrakesh Pierre Bergé, chairman of Jardin Majorelle Foundation, and decorated him with the prestigious “Grand Cordon of Alaouite Wissam”.

M. Bergé received the royal distinction in recognition for his outstanding contribution to the promotion of Moroccan heritage through his cultural projects in Morocco such as the museum of his Foundation.

Since arrival in Morocco, Pierre Bergé and his life partner, late Yves Saint Laurent, and co-founder of his couture house, were fascinated by Moroccan arts and Islamic culture.

The Jardin Majorelle, one of the most fabulously photogenic must-visit gardens in Marrakech, was originally built as a workshop for the French painter Jacques Majorelle in 1922. A keen botanist, the artist surrounded the building with a garden made up of exotic plants and rare species.

In 1937, he developed his own colour – Majorelle blue – with which he used to paint the walls of the workshop and then the entire garden. The stunning spaces that resulted were opened to the public in 1947 until Jacques Majorelle’s death in 1962. Afterwards, the garden was abandoned and fell into ruin.

Yves Saint Laurent and Pierre Bergé bought the site in 1980 to save it from being turned into a hotel complex. Renaming it Villa Oasis, the pair established an art deco-style workshop on the site, which now houses the Berber Museum.

Jardin Majorelle is now one of the most visited sites in Morocco. It took French painter Jacques Majorelle (1886-1962) forty years of passion and dedication to create this enchanting garden in the heart of the “Ochre City”.

The Garden offers visitors a calming retreat from the Marrakech bustling city, sheltered by high earthen walls. It also offers environment lovers a stroll along shady lanes, in the midst of trees and exotic plants.

Visitors can enjoy refreshing, burbling streams and pools filled with water lilies and lotus flowers. They also can hear wafting through the air, laden with sugared fragrance, the rustling of leaves and the chirping of numerous birds, which come there to take refuge.

The garden was built with Moorish charm, with a hint of Art Deco, painted in astonishingly vibrant primary colors, glowing with an intense blue the artist perceived in the Atlas Mountains.

More than 700,000 people, both tourists and Moroccan citizens, visit it every year. Students from all Moroccan schools can visit for free. Open every day of the year, Jardin Majorelle employs 90 people, and the profit it generates benefits other projects in Morocco.