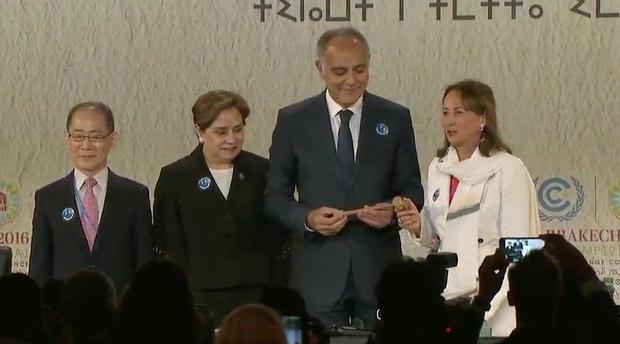 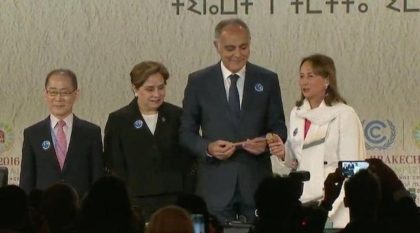 Morocco has officially taken over the presidency of the 22nd Conference of the Parties to the UN Framework Convention on Climate Change (COP22) Monday as the global conference kicked off in the city of Marrakesh.

At the opening ceremony of the 22nd Conference of Parties to the Framework UN Convention on Climate Change, COP 22, president of COP21 Segolene Royal handed over the presidency to Morocco’s Foreign Minister Salaheddine Mezouar, in the presence of around 20,000 delegates from 196 countries.
In her opening address, Segolène Royal who is France’s Environment Minister called for climate justice, especially for Africa.
She welcomed, in this respect, the speech King Mohammed VI delivered Sunday from Dakar to mark the 41th anniversary of the Green March, in which the Sovereign underscored that COP22 is a conference for Africa.
“Aware that Africa is one of the regions most affected by climate change, I have made sure that the Climate Conference which opens in Marrakech this week, is a conference for Africa,” the Monarch said in his Green March speech.

“Accordingly, I have called for an African summit to be held on the sidelines of this conference in order to develop a common vision to uphold our continent’s demands, particularly in terms of funding and transfer of technology,” the King underlined.
Segolène Royal argued that climate justice consists in providing financing and technology transfer to the continent which “suffers most from the impacts of climate change, especially desertification.”
Africa also needs to address the population growth expected by 2020, she said, adding that the decision to earmark $10 billion to support the development of renewable energy across the continent is a “decision taken by Africans and for Africans.”
She welcomed, in this vein, the initiatives launched by Morocco to adapt to climate change, including the North African country’s determination to use renewable energy to cover 52% of its needs by 2030 and the construction of the solar power plant Noor Ouarzazate.
The COP22 President, Salaheddine Mezouar, on his part, said Morocco will engage in an open and transparent dialogue with the support of various partners to address climate change.
If the Paris Climate Conference led to a binding agreement, the COP22 will lay the foundation for a new global stage that would involve the signatories in a concerted action, he said, pointing out that in order to achieve this goal, the Moroccan Presidency proposes the setting-up of a platform to support the implementation of the Paris Agreement and take urgent measures to protect the environment.
The COP22 is held in a promising context, marked by hope and legitimate expectations and convening this global event on African soil shows the involvement of the whole continent in the global efforts to protect the environment, Mezouar said, calling for concrete actions in order to implement the Paris Agreement.

And the agenda of COP 22 actually focuses on ways to implement the priorities of The Paris Agreement, especially those related to adaptation, transparency, technology transfer, capacity building, and loss and damages.

The Conference will also be an opportunity to debate several issues relating among others to agriculture, food security, energy, industry, transport and water.
The event will wind up on November 18.