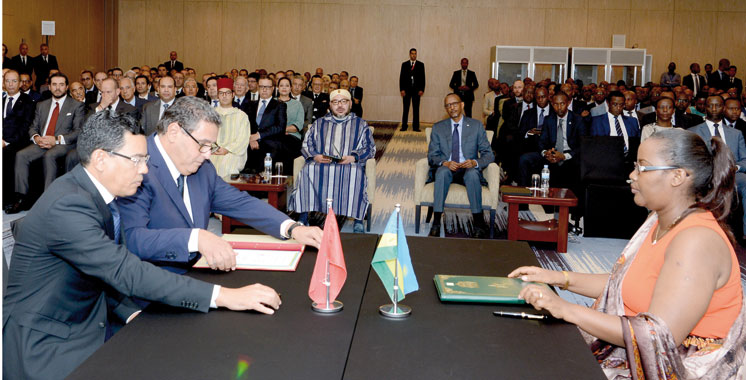 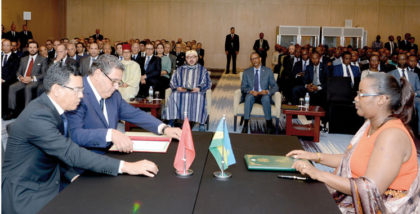 Morocco and Rwanda signed on Thursday four agreements relating to the transfer of know-how in terms of agricultural expertise with a special focus on promoting small farming and fostering agricultural productivity.

The signing ceremony was chaired by King Mohammed VI who is currently on a visit to Kigali and Rwanda’s President Paul Kagame.

These agreements provide for cooperation in fields ranging from boosting agricultural resilience and productivity, harvest insurance, fertilizers and funding.

On this occasion, Morocco’s agriculture minister Aziz Akhannouch, gave a briefing on the aims of the partnership which was elaborated in implementation of Royal directives to help Rwanda benefit from the Green Morocco Plan experience notably in terms of promoting small farming to increase the revenues of small farmers and improve living conditions in rural areas.

Akhannouch said that Morocco will spare no effort to share the agricultural expertise it accumulated since the launch of the Green Morocco Plan in 2008 with a view to helping Rwanda unlock its full agricultural potential.

Morocco’s experience in funding small farming projects as well as its efforts to the resilience of the agricultural sector to climate changes are also part of the partnership, said Akhannouch, noting in this respect that the Kingdom will host the climate summit COP22 which attaches particular importance to the climate challenges facing developing states.

Earlier on Thursday, King Mohammed VI visited the memorial commemorating the victims of the Rwandan genocide, which claimed the lives of one million people in 1994.

The King laid a wreath of flowers on one of the common tombs where the remains of the genocide victims are buried and observed a moment of silence.

The memorial, located in Gisozi, Kigali suburbs, was inaugurated in April 2004, on the occasion of the 10th anniversary of the Rwandan genocide. The memorial includes three permanent exhibitions surveying the tragedy’s circumstances and reasons behind the growing tension between Rwandan ethnic groups that triggered the genocide.