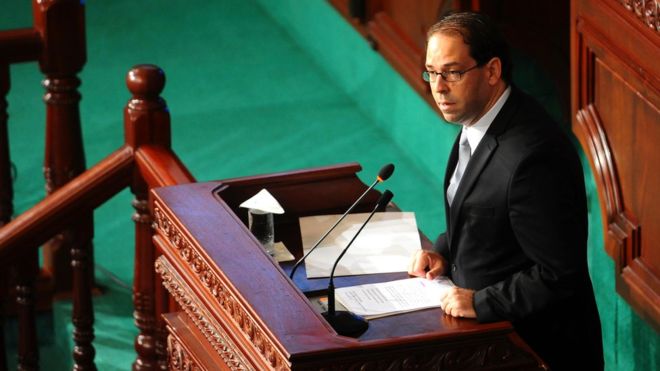 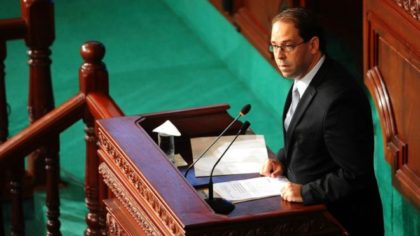 Out of the 217 parliament s members, 167 approved Chahed’s unity cabinet made of Islamists, leftists, unionists and independents.

Tunisia, democratic model of the North African region is confronted with severe economic crisis pushing the state to apply for several international loans in order to shore up the economy with forecast putting growth at 1.5 per cent next year.

Prime Minister Chahed, in an address to lawmakers before the vote, indicated that the country will be forced to implement austerity if nothing is done.

“If the situation continues like this then in 2017 we will need a policy of austerity, and dismiss thousands of public sector employees and impose new taxes,” Chahed said.

The 40-year old Tunisian Premier, the youngest in Tunisia’s history, also indicated that he will push through reforms as requested by the international partners namely the World Bank, and the International Monetary Fund and adopt tough lines on illegal strikes.

“We will not allow interruption of production at any factory and we will be firm and severe in dealing with illegal strikes and sit-ins,” he said.

Appointed by President Caid Essebsi to form a unity government, Chahed accused for his bonds with the President has replaced outgoing US-trained Economist Habid Essid who was denied a vote of confidence by the parliament early this month.

Tunisia’s vibrant tourism industry contributing up to 8 per cent of the GDP has been severely hit by the 2011 Arab Spring. The industry received further blows last year after three terrorist attacks killed 71 people most of whom were foreign tourist.

The country’s crucial phosphate industry plummeted, losing 60 per cent of its production capacity.

The country also faces huge public wage pay-outs which have skyrocketed to hit 13.4 billion dinars against 6.7 billion dinars ($3.06 billion) in 2010, the Reuters reports.