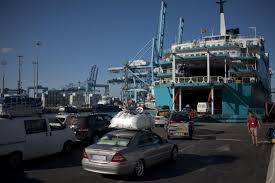 A new Moroccan ferry company has been set up to enhance the North African country’s maritime connectivity with neighboring European countries. This initiative has been highly commended by tourism professionals and businessmen.

Dubbed “Africa Morocco Link,” the company was established by BMCE Bank of Africa, a leading Moroccan and African banking group and Greek Attica, a subsidiary of Marfin Investment Group.

According to the agreement sealed by the stockholders, Attica Group gets a 49 pc participation in the new company, while 51 pc will be held by a group of Moroccan shareholders led by BMCE Bank Of Africa Group.

The launching of this new company marks a strong comeback of BMCE Bank in maritime transports, said Head of BMCE Bank group Othman Benjelloun, noting that Morocco Africa Link will have a fleet of six boats for the transport of passengers and vehicles.

Mr. Spiros Paschalis, CEO of Attica Group, said “We are delighted to collaborate with BMCE Bank Of Africa Group, one of the leading banking groups across Africa, in the newly – established operator AML.”

“We are confident the new maritime company will become very soon the leading ferry player linking Morocco and Africa to Europe. Attica Group is honored by the trust vested in our Group by BMCE Bank Of Africa”, he added.

“We have no doubt that our extensive experience in the ferry industry, combined with the top quality service that we offer to our customers, will lead to the upgrade of existing services in the market and to the development of Moroccan maritime personnel skills to the highest possible standards, achieving the operational excellence of both BMCE Bank Of Africa and Attica Group”, stressed Mr. Spiros.

He also said that he is convinced that the agreement will usher in a new promising start and strengthen the ties between Morocco and Greece.

The annual traffic volumes between Morocco and Europe are estimated at around 4 million passengers, 1 million private vehicles and 260,000 freight units, with great potential for further growth.

The company has launched lately the Tanger Med (Morocco) – Algeciras (Spain) route with the vessel DIAGORAS, followed a few days later by a second vessel. Additionally, a number of preparatory initiatives are currently underway for the launch of additional routes between Morocco and Europe including Nador (Morocco)-Almeria (Spain) and Tanger Med (Morocco) – Sete (France).

The establishment of this new company coincides avec the start of “Operation-Marhaba 2016” destined to ensure the best travel conditions for Moroccans living abroad who come home for their holidays.