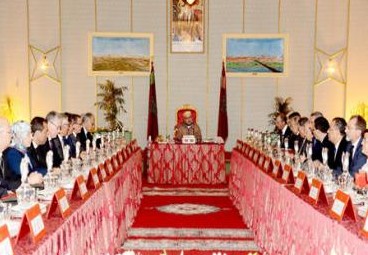 Morocco’s King Mohammed VI who is currently undertaking a tour in the Sahara provinces proceeded Saturday in Laayoune to the appointment of several officials to high ranking positions as well as a number of new ambassadors.

The appointments, announced during a Ministers’ Council, were made on the recommendation of the Ministers of the concerned departments as stipulated by the Constitution and the laws in force.

Before the Ministers’ Council, the Sovereign appointed Nasser Bourita Junior Minister of Foreign Affairs and Cooperation, and Hamid Addou, former director of the National Tourist Office, as CEO of the Moroccan carrier, Royal Air Morocco, in replacement of Driss Benhima who was at the helm of the company since 2006.

After the Ministers’ Council and after he had launched the previous day very important economic and industrial development projects in Laayoune (a Technology Park in Foum El Oued and an integrated fertilizer production complex in the Phosboucraâ phosphate site) King Mohammed VI headed to Dakhla farther to the south.

And again, the inhabitants of the city lined up all along the route of the royal procession to greet their king and renew their attachment to their Moroccan citizenship.

The royal visit, the fourth in the province of Dakhla-Oued Eddahab since King Mohammed VI came to power in 1999, is an event of great importance for the inhabitants who know that the sovereign will launch or dedicate several projects that will give a new momentum to the socio-economic development of their province.

Actually, King Mohammed VI had announced a new development model for the Sahara provinces and his decision to muster all the means available to implement a number of major projects as well as social, medical and educational programs in the regions of Laayoune-Saqia el-Hamra, Dakhla-Oued Eddahab and Guelmim-Oued Noon.

During the Ministers’ Council held in Laayoune Saturday, the Minister of the Interior made a presentation on the strategy followed to implement the new development model of the southern provinces and subsequently speed up the advanced regionalization process.