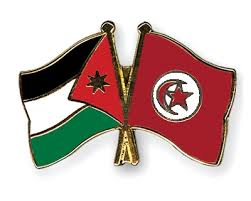 Tunisia’s Prime Minister Habib Essid is on a working visit to Jordan as the head of a delegation for the 8th Tunisian-Jordanian joint commission meeting. He met separately with King Abdullah II, his Jordanian counterpart and other senior government officials as both countries intend to increase their scope of cooperation.
King Abdullah wants to build stronger ties with the North African country and the adoption of a holistic approach to tackle extremism and terrorism in order to maintain and preserve security and stability. Jordan joined the U.S led coalition against the Islamic State after one of its pilots captured in Syria, after a crash, was burnt alive by militants of the extremist group. Tunisia has been experiencing sporadic terrorist attacks and its tourism sector is heavily affected.
After the sessions of the joint commission, the two sides recommended the coordination of their efforts against terrorism while taking into consideration the military, security, social, educational and cultural aspects involved. They agreed to coordinate their actions with regional and international bodies to make the fight against terrorism more effective. Amman highlighted its willingness to provide support to the government, the military, security and private sector in Tunisia.
Focusing on regional matters, they called for a political settlement in Syria and Libya but considered the ongoing war in Yemen as an internal affair and cited the importance to respect the country’s sovereignty while urging other countries and international bodies to abide by the Security Council resolutions, the decisions of the 26th Arab Summit, the Gulf Initiative and the recommendations of the national dialogue congress. The joint commission wants a two-state solution to end the Israeli-Palestinian conflict with Al-Quds as capital.
Essid will be heading to Qatar after Jordan.