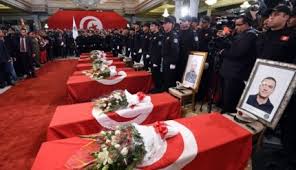 King Mohammed VI of Morocco, one of US major ally in North Africa, condemned Wednesday the terrorist Isis attack that rocked the Tunisian capital, claiming the lives of 13 innocent people.

Following the despicable terrorist attack that targeted Tuesday a bus of the presidential guard in Tunis, the Moroccan monarch rang President Beji Caid Essebsi and reiterated his “condemnation of this criminal act which aims to undermine the security and stability of Tunisia.”

During the phone call, the Moroccan Sovereign assured the Tunisian Head of State of the Kingdom’s “continued support to fight this abject terrorism,” says a press release issued by the king’s Office

The Sovereign also expressed Morocco’s “absolute solidarity with Tunisia and the kingdom’s support to this country to continue and consolidate its democratic and development process in unity, security and stability”, adds the statement.

King Mohammed VI reiterated to the Tunisian President and, through him, to the brotherly Tunisian people and the bereaved families, his condolences for the victims of “this cowardly terrorist act.”

Following the Tunis attack, president Caid Essebsi declared a state of emergency throughout the country and a curfew in the capital. In a televised address, the Tunisian president said his country is at war against terrorism and called for international cooperation against extremists who have staged attacks across the world in recent weeks.

“I want to reassure the Tunisian people that we will vanquish terrorism,” he vowed.

The bombing in the Tunisian capital comes as the country is on high alert against attacks by Islamic State.

In June, 38 foreign tourists mostly Britons were killed by a gunman at the Sousse beach resort. The attack followed the killing of 21 people by two gunmen at the Bardo Museum in Tunis in March, dealing a hard blow to local tourism.

Tunisia braces to mark five years since the start of its Arab spring revolution that resulted in the ousting of dictator Zine al-Abidine Ben Ali. But while democracy appears entrenched after two series of successful elections, security remains in crisis and the weakest link!