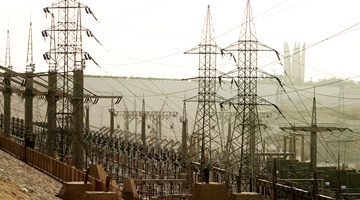 The Egyptian government has obtained a German financial support for three power projects to be carried out under the supervision of German group Siemens, through their local partners Orascom Construction and El-Sewedy Electric.

The three projects will cost $ 6.3 billion lent by Deutsche Bank, HSBC Germany and German Bank of Reconstruction (KfW). The loan will be paid back over a 15-year period, with a three-year grace period. According to Egyptian officials, the funds will cover 85 pc of the total cost of the three Egyptian projects.

The three projects, which will have a combined generation capacity of 14,400MW, will use a unique financial model, the Energy Performance Contracting (EPC) system.

The first project, to be carried out in Beni Suef, the governorate’s capital, about 115km south of Cairo, will have a generation capacity of 4,800MW.

The site of the second project is in Burullus 210km north of Cairo, while the third project will be located in the Egyptian new administrative capital city.

Together with local Egyptian partners, Siemens will supply on a turnkey basis three natural gas-fired combined cycle power plants, each with a capacity of 4.8GW, for a total combined capacity of 14.4GW. Each of the three power plants will be powered by eight Siemens H-Class gas turbines, selected for their high output and record-breaking efficiency.

The plants will add power to the grid in stages. Plans call for an initial 4.4GW to go online before summer 2017 and the full 14.4GW to become available three years after.

Siemens has been working in Egypt since 1859, and has maintained a continuous presence in the country since opening its first office in Cairo in 1901.

The company’s technology has been implemented in the Nubaria, Talkha, Damietta, Midelec and El-Kureimat power plants. Siemens is also a key technology supplier to major projects in the transport, healthcare and industrial sectors in Egypt.