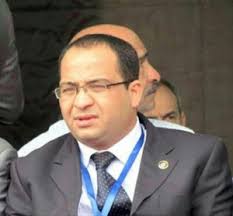 Deputy foreign minister of the Libyan internationally recognized government had been attacked and beaten up Tuesday night in his office, reports say.

Deputy foreign minister Hassan Elsaghir was attacked in his office in Beida by unidentified men.

Reports say some tribal armed men broke into the foreign ministry on Tuesday evening and attacked the building. Some other contradictory reports indicated that the minister was attacked by angry workers who were demanding positions in one of Libya’s foreign missions.

Two other staff men are also reported injured and admitted to hospital.

The Libyan diplomat who served in Senegal as Libyan ambassador during Al-Zidan’s premiership was also victim a couple of months ago of attack by militia men who had kidnapped him briefly from his hotel room after he refused to issue diplomatic passports to some militia leaders.

Government led by Prime Minister Thinni is regularly rocked by militia men who act with impunity. Thinni himself has been subject several times to militia men’s uncontrolled actions. He was removed from his plane last summer as he was to fly for vacation in Egypt.