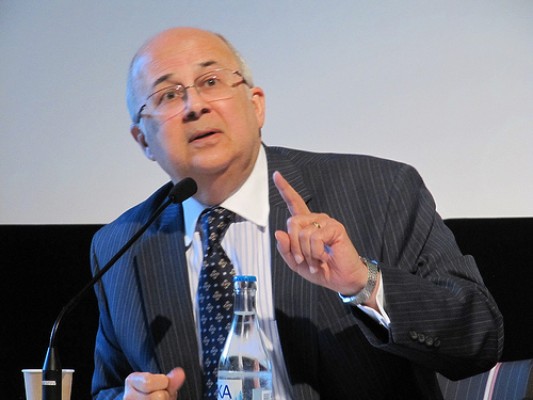 Ismail Serageldin, the director of the Bibliotheca Alexandrina, is being sued for squandering public funds after library staff accused him of abuse of power claiming he unfairly appointed advisors and gave them huge salaries.

He was also accused of embezzling donations destined to the library and illegally transferring them to a bank account controlled by former first lady Suzanne Mubarak.
Serageldin and three library staff members, including the library’s financial director, were referred to court in March.
During an appearance earlier this week, the trial was postponed to November 12. Serageldin denied all the charges against him and his defense lawyers requested that he be acquitted.
Commentators were dazzled by the trial of this enlightened scholar and stanch advocate of Islamic liberalism upholding reason and tolerance. All along his career that he started as consultant in city and regional planning and teacher at Cairo University and Harvard University prior to joining the World Bank in 1972, Ismail Serageldin devoted himself to the fight against intolerance, hatred and religious fanaticism and to the promotion of the principles of freedom and human rights, and especially women’s rights.

Long before the 2011 Egyptian revolution that toppled President Hosni Mubarak and brought to power a former leading figure of the Muslim Brotherhood, Serageldin’s relations with the movement were rather tense as he used to seize any opportunity to voice his opposition to its conservatism and fanaticism. Serageldin who used to denounce what he called the “drift toward an intolerant, pseudo-religious fanaticism” had shocked his opponents when he opposed the creation of a mosque within the Alexandria Library.
In a long story devoted to Ismail Serageldin few years ago, the New York Times had underlined that Egypt’s Islamist circles criticized the Library Director, claiming that despite “his professed devotion to tolerance and freedom of thought, he rarely, if ever, invites them to his conferences.” Among those critics was Mohammad Morsi, who is now President of Egypt. “You find representatives from the left and the nationalists and of course many of those who are loyal to the current regime… I am never invited, not me or anyone like me,” Morsi had been quoted by the NYT as saying.

Serageldin, born in 1944 in Giza, grew up in Cairo and graduated in 1964 with a Bachelor of Science degree in engineering from Cairo University. He later graduated with a Masters’ degree and a Ph.D. from Harvard University. Holder of 29 honorary doctorates from universities around the world, he has published over 60 books and monographs and over 200 papers on a variety of topics including biotechnology, rural development, sustainability, and the value of science to society. Serageldin, who is sometimes referred to as the “most intelligent man in Egypt”, received the Public Welfare Medal from the National Academy of Sciences in May 2011.
The director of the Library of Alexandria is also chairman of the board of the seven affiliated research institutes and the three affiliated museums.

Ismail Serageldin, who is a knight of France’s Legion of Honor, is also a member of the Fondation Chirac’s honour committee, ever since the foundation was launched in 2008 by former French president Jacques Chirac in order to promote world peace. He also participates as jury member for the Prize for Conflict Prevention awarded every year by this foundation.
Now, the tide may turn. One of his former harsh critics, Morsi, is at the helm of power and Serageldin is being sued. Will he be ousted from his position as director of the Library of Alexandria that he proudly presents as his own achievement? The verdict will tell.