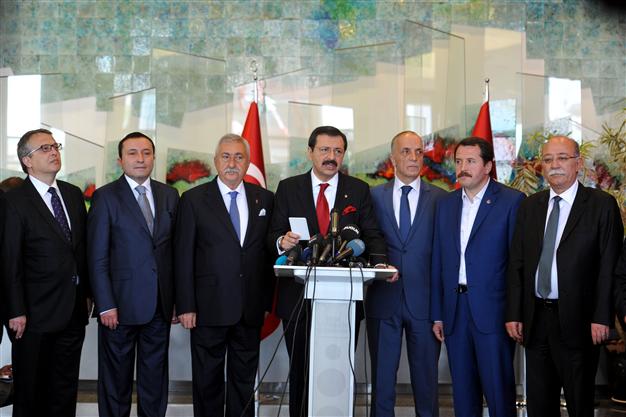 A coalition government, an opportunity for Turkey, Business tycoons 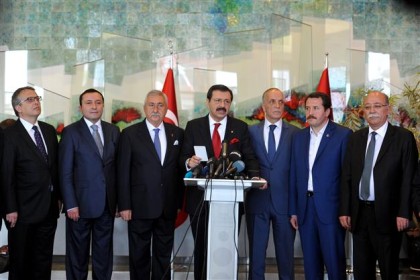 Turkish top business entrepreneurs on Wednesday met with Turkish politicians to urge them to overcome their differences and form as soon as possible a coalition government that will help solve many problems.

A delegation of managers, members of the EU-Turkey Joint Consultative Committee, led by the head of the Turkish Union of Chambers and Commodities Exchanges (TOBB) and a delegation from the Independent Industry and Business Association (MÜSİAD) met with the leader of the Republican People’s Party (CHP), Kemal Kılıçdaroğlu.

They underlined their expectation for the urgent formation of a government, and  also the importance of a “conciliation culture” and dialogue throughout this process.

TOBB President Rifat Hisarcıklıoğlu stressed the need of a new government that will start working on the economic challenges facing the Turkish business world and nation.

Also, Hisarcıklıoğlu argued that politicians should be aware that new elections would only make Turkey lose more time and would not generate any solutions to structural problems in Turkey. He continued arguing that forming a coalition government would not only prevent additional risks derived from global economy, but it could also lead to a much-needed culture of reconciliation.

Furthermore, MÜSİAD boss Nail Olpak who tallied Hisarcıklıoğlu’s remarks, said that the new composition of the parliament is a chance and opportunity for the whole nation to come together arguing that a coalition government could together change the constitution.

The Business bosses continued their consultation with Turkish Premier Ahmet Davutoğlu who received a delegation from the Turkish Industry and Business Association (TÜSİAD) and MÜSİAD.

At the end of the meeting, TÜSİAD chair Cansen Başaran Symes said discussions with the prime minister were positive.

June 7 elections reshaped the Turkish parliament spectrum as the ruling party AKP lost its overall majority in the parliament and needs other parties to form a coalition government.