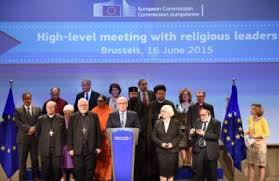 Religious Leaders Discuss in Brussels “Living together and disagreeing well”

Fifteen religious leaders from Christian, Jewish, Muslim, Hindu, Buddhist and Mormon communities held on Tuesday in Brussels the European Commission-sponsored annual high-level meeting that was devoted this year to discussing the topic “Living together and disagreeing well.”

This inter-religious meeting, the eleventh in the series of meetings launched by the Commission in 2005, is all the more important at this juncture of history, marked by the spread of radicalism and fundamentalism, and is also important as it offers a platform for dialogue likely to promote social cohesion and bridge divides.

“This dialogue has never been more important. Our societies face fundamental challenges, and churches and religions are among the actors that can play an important role in promoting social cohesion and bridging divides,” said First Vice-President of the European commission Frans Timmermans at the opening of the meeting.

He described the religious leaders attending the meeting as “partners for the European Commission” as they can, he said, “share their experience in fighting fundamentalism, discrimination and in building mutual trust and understanding.”

Echoing him, European Parliament Vice-President Antonio Tajani, responsible for the implementation of the dialogue, said radicalism and fundamentalism cannot be defeated unless all communities join efforts and stay together.

“Dialogue between religions is crucial to defend the values of our societies,” he said, urging European institutions to foster this dialogue not only at the level of religious leaders and theological experts, but also through the involvement of the youths. “We need to invest more not only in our economy but in the future of our youth. We need policies which foster key values such as peace, solidarity and respect of human dignity among future generations and societies,” he insisted.

The conclusions of the high-level meeting will feed into the first Annual Colloquium on Fundamental Rights in the EU to be held next October 1-2 under the topic of “Tolerance and respect: preventing and combating anti-Semitism and anti-Muslim hatred in Europe”.

According to an EC statement, the high-level meetings and working level discussions are held regularly between the European Commission and churches and religious associations and communities as well as philosophical and non-confessional organizations. Since 2009, the dialogue is enshrined in the Lisbon Treaty.