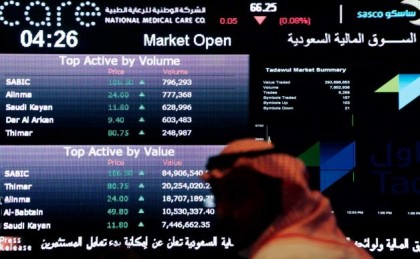 Saudi Arabia, the world’s largest oil producer, has opened Monday for the first time its stock market to foreign investors in a bid to attract more international capital to help the country diversify its economy and reduce its heavy dependence on oil.

The stock market liberalization move comes following the sharp fall in oil prices during the past 12 months. The move allows foreign investors to buy and sell shares in listed companies on the Saudi stock market worth $ 560 billion dollars.

The Saudi Stock Exchange, or Tadawul, is made up of 170 companies specialized in banking, property and oil & gas and shipping.

In a bid to prevent any speculative rush, the Saudi market regulators have restricted trading to institutions and professionals with $5 billion in assets and a five-year investment track record.

This means that only the biggest financial institutions such as banks, brokers and fund managers will be allowed to get into the market.

However, foreign investors will not have the upper hand as they are not allowed to take the majority of stakes in Saudi companies wherein their share is limited to 5 pc. They are excluded from six  companies which are “Makkah Construction & Development”, “Jabal Omar Development”, “Medina-based Taiba”, “Knowledge Economic City”, “Saudi Real Estate” and “The National Shipping Company of Saudi Arabia”.

According to some experts, Saudi strong economy, the biggest in the Middle-East region, will attract investors as the country’s non-oil sector continues its growth rate at around 5 pc this year

Though it was hailed, the opening of the Saudi stock market did not attract major international institutions because of the restrictions imposed by the market legislator but investors are upbeat.