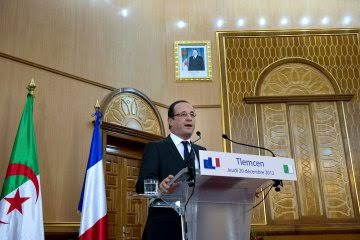 French President François Hollande on Monday paid a short visit to Algeria where he discussed with ailing President Abdelaziz Bouteflika and Prime Minister Abdelmalek Sellal a number of security-related issues with focus on the fight against terrorism and the chaotic situation in neighboring Libya.

During the seven-hour visit to the North African country, the two sides also discussed economic partnership.

Hollande told reporters that the two countries are teaming up on security matters adding that “security means fighting terrorism.”

Terrorists have been using Algeria’s mountainous areas and its desert as a hideout and Algerian extremist Mokhbar Belmokhtar continues to serve as the promoter of the Al-Qaeda in the region.

The French president referring to terrorist groups as “this terrible and implacable enemy” said that the group had received “a blow” in the past hours. He was alluding to claims that Belmokhtar had been killed in an U.S airstrike in Libya although emerging reports claim that it was not the Algerian terrorist but someone else looking like him. An official confirmation is yet to be made.

Both Algeria and France have been victim of terrorist attacks on their soil and Hollande highlighted that they are engaged in a “common fight” against the terrorists. He called for a “joint work” considering the situation in the Sahel.

French companies have investments in Sahel countries running along the Sahara desert while Algeria also has its oil and gas deposits in the southern part of its territory.

In a rare concession to France, Algeria had let French fighter planes overfly its territory in January 2013 to intervene in Mali to uproot al-Qaeda militants that had pushed back Malian government forces and taken control of large parts of Northern Mali.