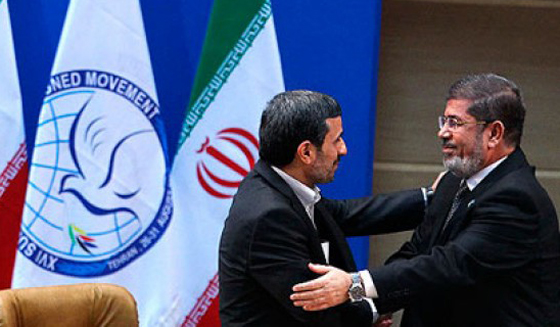 When, in 1949, Mao Zedong forced Chiang Kai-Shek’s army to retreat from mainland China, thus consolidating the Communist Party’s grip over the People’s Republic, the reverberations could be felt across the world. In the United States, Republicans put forward a poignant, yet rhetoric question: Who Lost China?

In the eyes of the Republicans, the answer seemed clear: It was the whimsy democratic foreign policy of the Truman administration that had made it possible for communism to establish firm control over a major chunk of Asia. The same question can be heard today, albeit in a different context. With Egyptian president Mohamed Morsi failing to guarantee protection of the U.S. embassy in Cairo and missing to condemn the violent outbursts over a nonsense-video wholeheartedly and in a timely fashion, president Barack Obama was hesitant to publicly call Egypt an ally. The American president’s cautious stance on the current U.S.-Egyptian relations was a clear contrast to the view that the United States officially holds: that Egypt is a major non-NATO ally. It is this point where the president’s Republican critics are sensing an opening. Has it been the same old whimsy democratic foreign policy that led to a situation, where the U.S. is now about to lose Egypt? After all, isn’t Egypt the centre of gravity in the Middle East, just as China is in Asia?

“Egypt, it is needless to say, is passing through a difficult transitional period, and with it, the nature of U.S.-Egyptian relations is about to change.”

The newly emerging domestic landscape already impacts on Egypt’s foreign policy. Formerly a major stalwart of U.S. interests in the broader region, receiving well over a billion U.S. dollars in foreign military financing from Washington, Cairo is now slowly drifting out of the U.S. camp. Mohamed Morsi has already visited an impressive number of foreign capitals and recalibrated Egyptian foreign policy. While the decline of U.S. influence is on open display, no other than the People’s Republic of China is trying to step into the void, offering investments and aid, both badly needed in a country still facing high unemployment, massive poverty and a staggering inflation, in no small part fuelled by rising food prices. And while Mohamed Morsi has impressed European political and business elites as a pragmatic leader, trying to attract investment, he was also the first Egyptian head of state to visit Tehran in decades and made a much noticed stop in Beijing.

Yet, these shifts are less substantial than one might be inclined to think. Even though Egypt has been a major U.S. ally in the past, its foreign policy had always had an independent streak, to say the least. In 1956, Egypt was the first country in Arab-African camp to recognise the People’s Republic as China and, in 1971, Cairo supported the People’s Republic’s push to unseat Taiwan at the United Nations, a move that eventually consolidated the crucial African and Arab support to replace Taiwan at the United Nations with mainland China. Cairo has always claimed a pre-eminent role in the Horn of Africa region and the Middle East, while the Arab League has long been considered as nothing more than an extension of Egypt’s foreign ministry. Its peace treaty with Israel, though playing into American foreign policy goals, was first and foremost a genuine reflection of Egyptian interests. Last but not the least, during the Cold War, Egypt and China enjoyed reasonably close ties through the Non-Aligned Movement.

So, one might be inclined to ask, is Washington really about to lose its erstwhile staunchest ally in the region? The answer to that perfectly valid question is more difficult than it may seem. Egypt might no longer be the major ally it has been during the Mubarak era, but then again, it hardly has a history of being a U.S. proxy. Its foreign policy recalibration, however, is actually less substantial than a superficial look suggests. When challenging Iran’s pro-Assad stance and calling out the Syrian regime for its massive human rights abuses, Cairo has far more credibility with the sort of independence it can now claim. And, should the democratic transition succeed, the loss of direct U.S. influence will likely find a balance in an Egyptian foreign policy that might more often be at odds with Washington, but will in principle reflect American interests. This kind of scenario should ultimately suit the U.S. just fine.

North Africa Post's news desk is composed of journalists and editors, who are constantly working to provide new and accurate stories to NAP readers.
NEWER POSTMauritania increasingly worried about mounting terrorism in the Sahel
OLDER POSTAlgeria to Invest US$71 Billion in Energy Sector by 2017