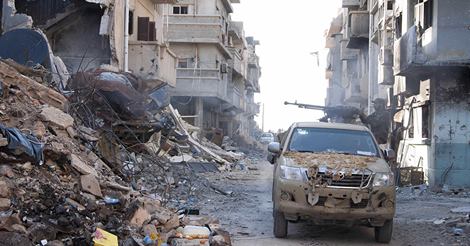 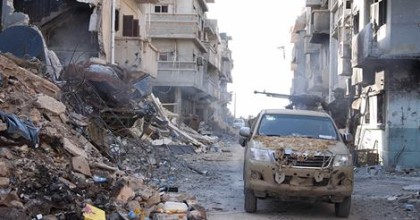 ISIS militants have taken control on Friday of Sirte air-base while Tripoli-based government militia back out of the city.

Mistrata’s 166 forces linked with Tripoli-based government tasked with securing the city pulled back from the city leaving the city in the hands of the insurgents’ group.

The chief commander of brigade 166, Mohamed Ahusan said they retreated as the authorities in Tripoli, General National Congress (GNC) failed to provide them with support and equipment to combat the insurgents.

Ahusan, argued that they threatened to pull back earlier on if they did not receive support.

An official in Mistrata accused General National Congress (GNC) because it was unable to back them with weapons and fighters.

“We did not get any support from the GNC. We don’t have enough weapons, enough vehicles. The other side has everything,” the official said.

Prime Minister of the Tripoli-based government, Mohamed al-Shami said their forces pulled out late in Thursday from the airport which had fallen into the hands of the ISIS organisation.

“After they left, Islamic State group fighters entered the base which had been completely emptied of equipment, except for one military plane which is out of use,” Prime Minister al-Shami added.

ISIS said it took control of the air-base, the largest of Libya, following the clashes with forces loyal to Tripoli-based government in their twitter post.

Shami said the pro-Tripoli forces would launch a counteroffensive to retake the airport once reinforcements arrived.

ISIS fighters and militias loyal to Tripoli-based government have been fighting for the control of the city.

ISIS has been in control of the center of the city and the port. The group has also reportedly seized control of the Manmade River complex some 25 kilometres east of the town.

Sirte, 450 kilometres (280 miles) east of Tripoli, is the hometown of the former Libyan leader Muammer Qaddafi who was ousted and killed in Libya’s 2011 uprising.

Libya collapsed, became a failed state divided into two different governments and two parliaments respectively based in Toburuk and in Tripoli.

The UN has been pressing various political and military actors of the crisis to reach an agreement for unity government.

North Africa Post's news desk is composed of journalists and editors, who are constantly working to provide new and accurate stories to NAP readers.
NEWER POSTEgypt : Riyadh and Cairo unified in Syria and against Iran
OLDER POSTUN plans to raise $1.6 billion for Zimbabwe by 2020