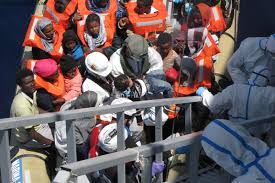 The Delegation of the European Union in Morocco has flatly denied the news alleging that Europe is planning to build an air base in the kingdom for drones to be used in the war against illegal immigration.

There is no such plans to build an air base in Morocco or in any other Maghreb country, said the EU delegation in a statement.

“There is no such project whatsoever in Morocco, Algeria or Tunisia. We do not know where some media got the information,” a source from the delegation told HuffPost Morocco.

Several local media claimed that European authorities had recently asked their Moroccan counterparts for permission to build an air base for the deployment of drones that will be used to curb illegal immigration in the Mediterranean.

The delegation denies the assertion and rejects it as groundless, says the statement.

Earlier press reports had said that European technical studies that showed that several sites located in Algeria, Malta, Morocco and Tunisia can help the EU in the struggle against illegal immigration and human trafficking if the EU can set up there airbases for unmanned reconnaissance drones.

Morocco had banned as of last February the importation or use of drones in the country without prior authorization out of security concerns.

Importing unmanned flying engines, remote-controlled or automated vehicles such as drones will be subjected to a prior import license, a joint statement by the Moroccan Ministries of the Interior and Foreign Trade had then said.

“Each use must be specifically authorized by the local authority,” the statement said.

Authorities justified the decision by the “security risks and damage to property and to privacy” that can be posed by the use of drones.

The course was attended by Moroccan and also by German militaries.

According to a press release by AFRICOM, the exercise involved the RQ-11B Raven known as the “Raven-B”.  The Raven-B is a lightweight drone that is hand-held.

It would provide the military with reconnaissance, surveillance, and target suspected enemies throughout the world.

“The Moroccan and German soldiers went through a quick brief on Small Unmanned Aerial Systems and a flight simulator to get more familiarization with the aircraft.”  The drone has numerous capabilities that can be used for both offensive and defensive purposes.

AFRICOM states that “An important aspect of the Raven-B is that it provides small units with situational awareness and can be employed in all environments for direct or general reconnaissance as well as offensive and defensive force-protection operations.”

“Exercise African Lion 13 is an annually-scheduled military engagement promoting partnership between the U.S. and Moroccan forces and is the largest exercise of its kind on the continent. For the first time, members of the Federation of German Armed Forces participated in a geospatial portion of the exercise,” AFRICOM said.