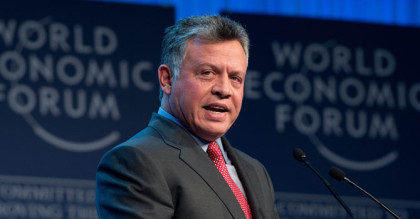 The World Economic Forum (WEF) on the Middle East and North Africa has opened in Jordan with King Abdullah II calling on the countries of the region to be their own leaders.

“My friends, we would solve the problems of our region but only when we build on its strength. We cannot be sidetracked by regional turmoil,” he said at the opening of the two-day event.

“We need to be our own leaders on this although we welcome global support,” he said.

King Abdullah lamented that the violence threatening the region is “part of a global assault on peace, democracy and co-existence” and called for a “comprehensive global approach” to overcome this challenge.

King Abdullah announced that his country has earmarked $18billion to development projects between 2015 and 2025. The King told delegates that the “10-year economic blueprint” will be based mostly on public-private partnerships.

Higher and steady growth has been forecasted in Jordan and Abdullah seemed upbeat as he said the kingdom’s “growth is rising again” and the blueprint will help to “move fast to diversify resources, develop infrastructure, and capitalize on strengths.”

He said Jordan is a gateway for regional and world trade investments despite the challenges it faces. He said the region has great opportunities and called for “a new push” that will engage “all sectors to create inclusive growth.”

Klaus Schwab, founder and executive chairman of the World Economic Forum, said violent extremism is “a challenge for all of us in politics, business and civil society.” He described it as “a cancer which – if not stamped out – is spreading globally.”

The details of Jordan’s economic blueprint will be presented by the Prime Minster Abdullah Ensour.