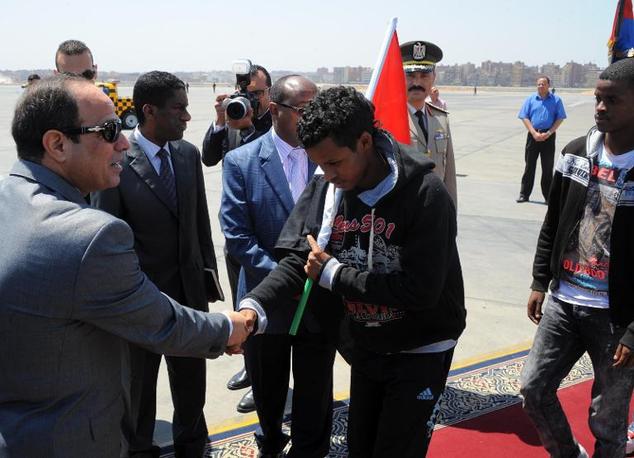 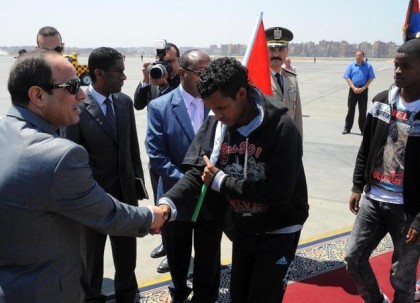 Egyptian President al-Sisi welcomed at the Cairo International Airport on Thursday 27 Ethiopians who had been abducted in Libya and who were freed thanks to Egypt’s intervention.

The execution of around 30 Ethiopian Christians by ISIS in Libya last April triggered mass demonstrations in Addis Ababa. The demonstrators condemned the barbaric act and asked the government to evacuate its nationals in the war-torn country.

More than 250 Ethiopians have registered for repatriation according to Foreign Ministry spokesperson Tewolde Mulugeta.

The Egyptian airplane, boarded by the Ethiopian citizens, came from Tunisia.

“Thanks to God and the efforts of sovereign bodies in the past days, the Ethiopians kidnapped in Libya were set free; they are the first batch of Ethiopian brothers who were in very great distress inside Libyan territories,” said Sisi as he welcomed them at the airport. Ethiopian Ambassador to Egypt Mahmoud Dardeer was present.

The successful release of the Ethiopians was facilitated by the coordination between the Egyptian, Ethiopian and Libyan governments. Sisi hailed the efforts of the Libyan and Egyptian security forces.

The Egyptian president underlined the interdependence of Ethiopia and Egypt saying that he told the Ethiopian parliament during his visit that “we are brothers, what harms them (Ethiopians) harms us, and we rejoice to see them happy.”

Egypt’s intervention to free the Ethiopians might help soften Ethiopia’s position on the Renaissance Dam construction that had strained relations between the two countries, before they sign, along with Sudan,  a declaration of principle to defuse the tension.

Cairo has nevertheless stressed that signing such a document does not mean that it supports the construction of the dam on the Blue Nile because it endangers Egypt’s livelihood.

North Africa Post's news desk is composed of journalists and editors, who are constantly working to provide new and accurate stories to NAP readers.
NEWER POSTKSA: Riyadh cementing role as Arabian superpower
OLDER POSTNationwide Yemeni ceasefire to be respected by all or no deal, Saudi FM