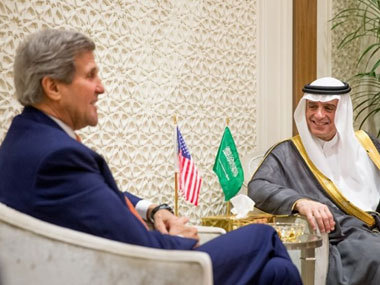 Nationwide Yemeni ceasefire to be respected by all or no deal, Saudi FM

The newly installed Saudi Foreign Minister Adel al-Jubeir announced that a five-day conditioned nationwide ceasefire in Yemen is underway but stressed that its longevity will depend on Houthis’ actions.

The urgent need to decree a ceasefire has been stressed by humanitarian relief organizations which find difficulties reaching the populations needing help.

During a joint press conference he held with U.S Secretary of State John Kerry in Riyadh on Thursday, Jubeir said the ceasefire will help get humanitarian aid into Yemen in coordination with international organizations, but warned that “the kingdom’s idea of a five-day ceasefire in Yemen” will be applied “everywhere or nowhere”  that the pause will soon begin but could be interrupted if the Houthi Movement and their allies “carry out acts of aggression.”

Since the Saudi-led coalition began a bombing campaign  against Houthis in Yemen on March 26, calls for a ceasefire increased but the Houthis have been silent on the issue.

At least 646 civilians have been killed and 1,300 others injured since the airstrikes began, according to the United Nations.

Secretary of State Kerry welcomed the idea and said the planned ceasefire will put the Houthis to the test. He described the upcoming ceasefire that “is conditioned on Houthis” as a “major opportunity to address the needs of the Yemeni people and find a peaceful way forward.” He urged “those [who] back them….to use all their influence” to make it viable.

Iran is believed to be supporting the Houthis and has been pushing for a ceasefire in Yemen.

Kerry threw a jab at Tehran when he expressed worries about Iran’s “destabilizing actions in the region.” He added that the U.S has not discussed sending ground troops into Yemen with the Saudi leaders.

The heavily contested strategic southern port city of Aden is on the verge of falling into the hands of the Houhtis prompting president Hadi’s government to call for the intervention of U.N ground troops.

Saudi Arabia promised a $274 million assistance to Yemen,  while Washington announced it would provide more than $68 million to help humanitarian organizations with their operations.