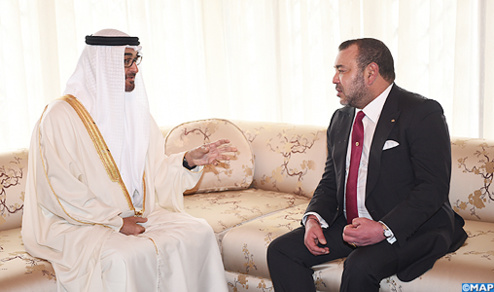 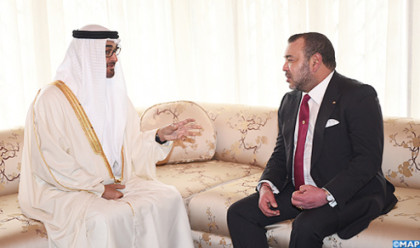 Morocco’s King Mohammed VI is paying as of this Monday a working and friendship visit to the United Arab Emirates for official talks with Sheikh Mohamed Ben Zayed Al-Nahyane, Crown Prince of Abu Dhabi, Deputy Supreme Commander of the UAE armed forces.

The visit takes place on the morrow of a visit Sunday to Saudi Arabia, his first since the enthronement of King Salman bin Abdulaziz.

The two visits, described by analysts as highly strategic, translate Morocco’s weight in the new regional political landscape and reinforce its status as a major ally of the Gulf Cooperation Council, which is challenged by the turmoil and civil war prevailing in some neighboring countries, mainly Yemen.

During his talks with King Salman, the Moroccan monarch expressed his country’s unflinching solidarity with and constant support to Saudi Arabia’s efforts to defend the unity of its territory, protect the holy shrines of Islam and face up any threats endangering peace and security in the whole region.

For his part, King Salman renewed Saudi Arabia’s unswerving support to Morocco in the Western Sahara issue, reaffirming that the Sahara is “an integral part of the territorial sovereignty and unity of the kingdom of Morocco”, as pointed out in a statement of the Moroccan royal cabinet released at the end of the visit.

The Moroccan-Saudi summit talks confirmed the broad degree of convergence of the two leaders’ standpoints on various regional and international issues, principally the developments on the Arab and Islamic arena. The two leaders have thus underlined the need to reach lasting solutions to the conflicts prevailing in some Arab countries so that the Arab Islamic community devotes all efforts to the Palestinian issue, which is at the heart of peace and stability in the Middle East and which is the cornerstone of security and stability in the whole region.

In this vein, King Mohammed VI expressed his country’s support to Saudi Arabia in its endeavors to restore legitimacy in Yemen and spare the region the impact of foreign interference.

Morocco is actually participating in the Saudi-led military campaign in Yemen and providing all forms of support to the coalition fighting the Pro-Iran Houthi rebels.

The two leaders have likewise renewed their commitment to support all initiatives seeking a solution to the Syrian crisis to put an end to bloodshed and restore security and stability in the country in line with Arab League and UN resolutions.

The two monarchs also voiced support to international efforts meant to struggle against terrorism, extremism and Jihadist groups, mainly the Islamic State group. They underlined the necessity to restore security and stability in Iraq through a multidimensional, participative approach involving all the components of the Iraqi people and to reach a settlement to the Libyan crisis through dialog and the adhesion of all the Libyan people.

The importance of the topics covered at the talks between King Mohammed VI and his Saudi and UAE interlocutors and the high-level delegation accompanying the Moroccan monarch, which includes three royal advisors, a number of government officials and senior civil and military figures, underline the political, diplomatic and military dimension of the visits.

The visits also translate the strategic ties binding Morocco and the two States, and consolidate the North African country’s position as a key ally of all the members of the Gulf Cooperation Council (GCC), which are facing the Iranian challenge, the terrorism threat and the explosive situation in Yemen.