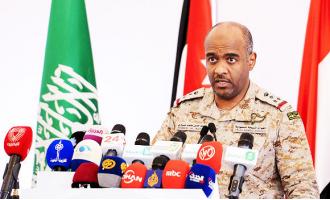 Saudi Arabia has announced the end of Operation Decisive Storm after coalition airstrikes “successfully removed threats to Saudi Arabia’s security and that of neighboring countries” but a new one dubbed “Operation Restoring Hope” will kick-off on Wednesday, according to a statement from the defense ministry.

Brigadier-General Ahmed Assiri, the coalition’s spokesperson, said Operation Decisive Storm was purely a military campaign while Operation Restoring Hope will be mainly political but that does that signify a ceasefire because military actions could be undertaken when deemed necessary. Aerial and naval supervision will continue. The Defense Ministry statement said the launching of the latest operation is geared towards protecting civilians and Asiri added that the Houthi Movement will be targeted if they tried to harm them.

Iran has welcomed the move and its Foreign Ministry spokeswoman Marzieh Afkham was quoted by semi-official ISNA news agency saying “before this, we said the crisis in Yemen had no military solution, and … a halt to killing innocent and defenseless people is absolutely a step forward.”

Asiri said the decision to end Operation Decisive Storm was reached following a request from President Hadi. Saudi Arabia considers Hadi as the legitimate president of Yemen and had stated that the objective of the military coalition is to reinstate him as the Head of the State. Asiri said “the coalition will continue to prevent the movement of Houthi militias from moving or undertaking any operations inside Yemen” after the airstrikes destroyed their ability to use ballistic missiles.

World Health Organization (WHO) stated on Tuesday that violence between March 19 and April 17 had killed 944 people and wounded 3,487, and warned that the impoverished nation’s health services were on the brink of collapse.